The Meaning Of Buddhist Stupas

Stupas are one of Buddhism’s most sacred objects and throughout our trips and on our city walking tour of Ulaanbaatar, we like our guests to gain an ‘essence’ of Mongolia’s Buddhist heritage. Monasteries are built not just as centres of worship but as centres of learning – their elements are designed to teach and inspire. The architecture of a monastery will be practical and at the same time deeply symbolic – such as the symbolism of a stupa. If you have travelled through a Buddhist country you will have come across stupas. They are often a dominant part of Buddhist monastery architecture along with prayer wheels. Spend time at Gandan Monastery (Gandantegchinlen Khiid) in Ulaanbaatar or Erdene Zuu Monastery in Kharkhorin and you will observe local Mongolians circling these structures. 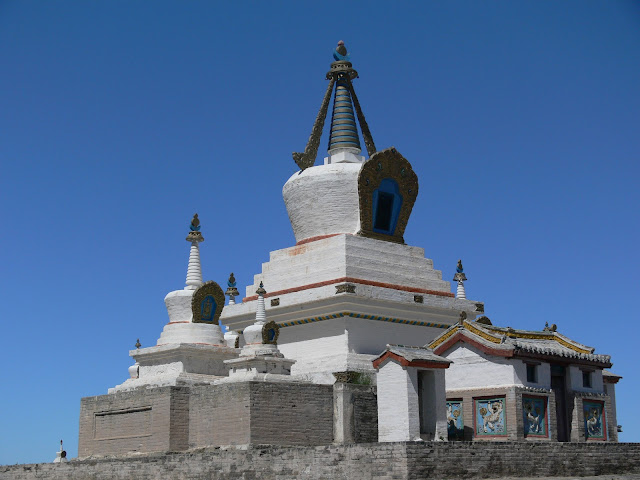 Most travellers are aware that stupas are significant structures within a monastery but few really know what they fully represent.

Stupas are said to bring prosperity and harmony to the surrounding community and to help prevent natural disasters by pacifying harmful environmental forces. As a Buddhist, it is the sum of your actions in life which determines your form in the next life. It is believed that the power of an action performed close to a stupa is greatly magnified. Prayer wheels are often found at the base of stupas – turning a prayer wheel in close vicinity to a stupa will create a store of merit or positive energy. Circling a stupa as a Buddhist will keep the hope of enlightenment at the centre of your awareness. 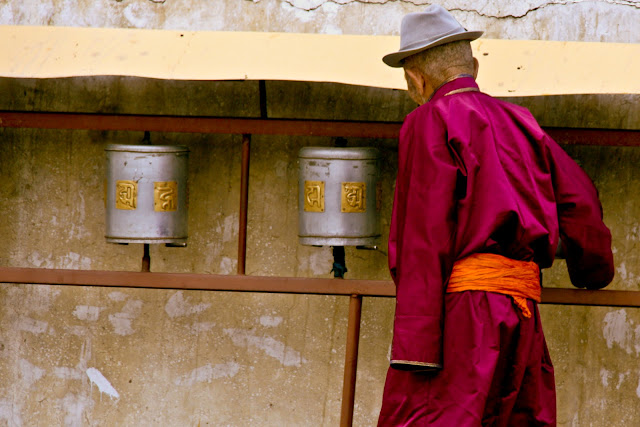 Prayer wheels at with Tibetan script inlaid upon them. Gandan Monastery, Ulaanbaatar. According to Buddhist belief spinning a prayer wheel is just as effective as reciting the sacred texts of Buddhism aloud. Spinning the prayer wheel increases the power of the mantras (prayers) inside the prayer wheel.

The stupa is one of the oldest Buddhist structures – the practice of creating them has existed since possibly neolithic times when simple burial mounds or cairns were constructed as reliquaries for holy people. Stupas are built to house sacred objects and relics of Buddhist masters are placed inside to amplify the power of a stupa. Commemorative stupas are built to observe events in the life of Buddha or his disciples.

Every layer of a stupa will contain multilayered symbolism. The five geometric shapes that make up the main design of a stupa are said to represent the elements of fire, water, earth, air and space. Part of the construction represents a lotus (the lotus has many meanings but one is spiritual and mental purity). The overall form of a stupa is said to be that of the Buddha seated in meditation – architectural representations of Buddha’s mind, body and speech.