Firstly. remove your watch. A high-speed express train this is not.  What else can you expect when travelling on the Trans Mongolian train?

The Trans Mongolian is the train line which links Beijing to Ulaanbaatar and then continues on to Ulaan Ude (or vice versa) where it connects with the Trans-Siberian. It is a remarkable journey – covering the wide empty plateau of the Gobi Desert with potential swift glimpses of white-tailed gazelle. Heading north after Ulaanbaatar, the rail link travels through Selenge Aimag – the name derives from the mighty Selenge River, Mongolia’s principal river.  This part of the journey provides a direct contrast to the Gobi being dominated by the magnificent scenery of river basins, forest-steppe and fertile agricultural landscapes. Enjoy Mongolian buuz or khuurshuur bought directly off sellers on the platform – an alternative feast is that of salami, gherkins and the ubiquitous vodka shared by locals to international travellers.  In the words of our guest Ross Briggs:

‘The train trip is quite relaxing. I spent most of my time looking out both sides at the endless Gobi views, often flat from horizon to horizon. As I have said before, I do not tire of these views and the enormity of the countryside. The weather was very good which enabled us to see a last spectacular sunset over the Gobi. The train trip was a good way to leave Mongolia, something new to experience and I would not discourage people from taking the trip.’

The Trans Mongolian itself covers 1110km in Mongolia and was built along the route travelled by the ancient tea camel caravans. It was built piecemeal between 1949-1961 as a direct result of the fluctuating political relationship between Russia and China. For those that need all the details it is mainly single track in Mongolia and double track in China.

‘The Trans-Siberian Railway is a regular railway, a means of transport vital to the people living along it.  It’s not run for tourists, so you won’t find bar cars with pianos or deluxe suites with en suite showers.  However, all passengers get a proper flat berth to sleep in, provided with all necessary bedding, convertible to a seat for day use.  There are washrooms and toilets along the corridor, and a restaurant car for meals.’ Man In Seat 61

As the Man in Seat 61 says: ‘The Trans-Siberian Railway is a regular railway, a means of transport vital to the people living along it.’ That means there are regular departures all year round. Yes, do consider travelling on the Trans Mongolian train in the summer but consider all the other travellers doing the same. Winter offers a more unique perspective and fewer international tour groups. 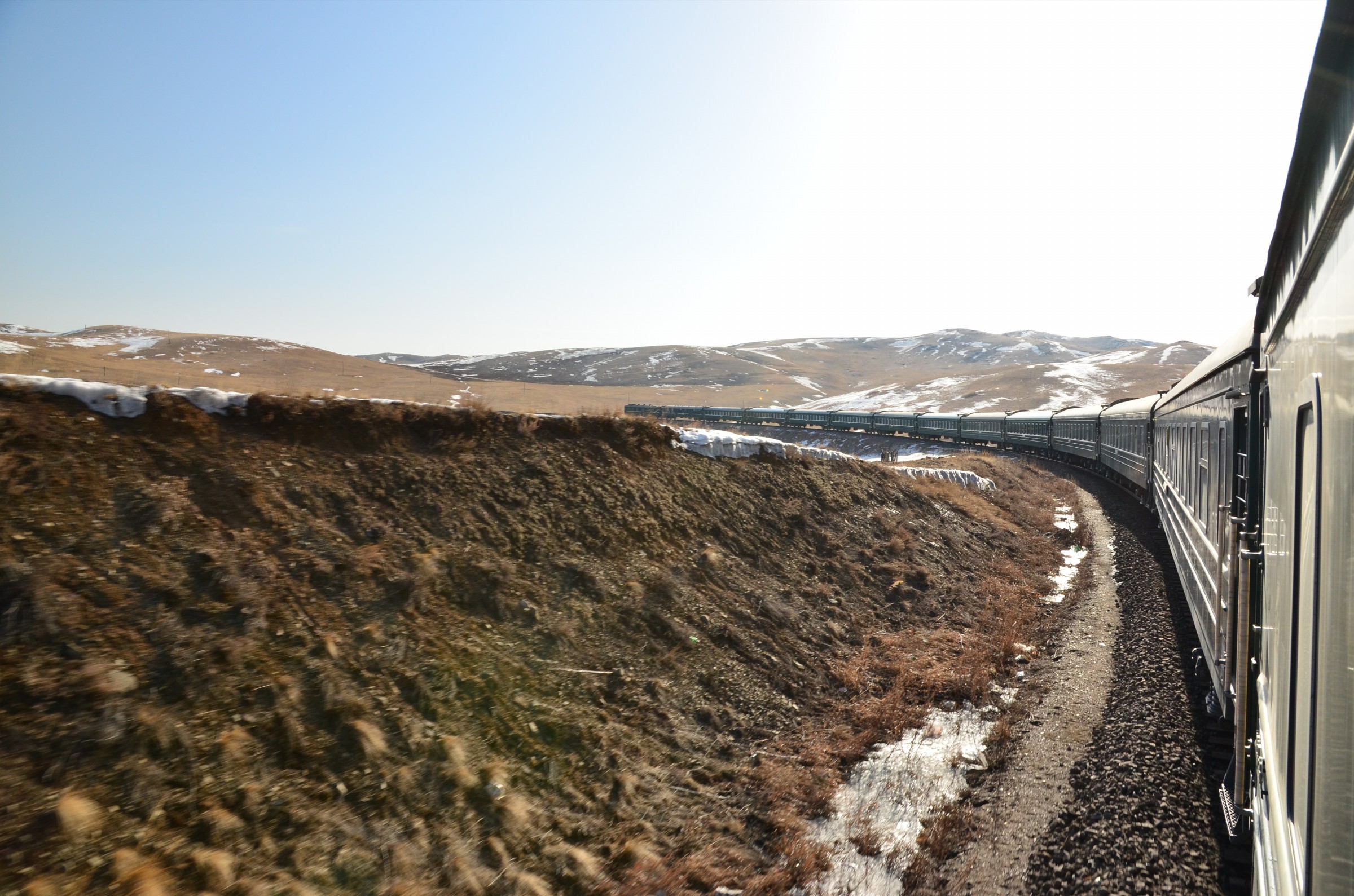 Top Tip  – It’s all in the train numbers

The train’s number tells you its relative speed and modernity: the lower the number, the higher the speed and price. The slower lower-quality trains have three-digit train numbers. Although these are more basic, they still provide an element of comfort. If you’re coming into Mongolia on one of the international trains then there can be delays when you cross either of the borders. 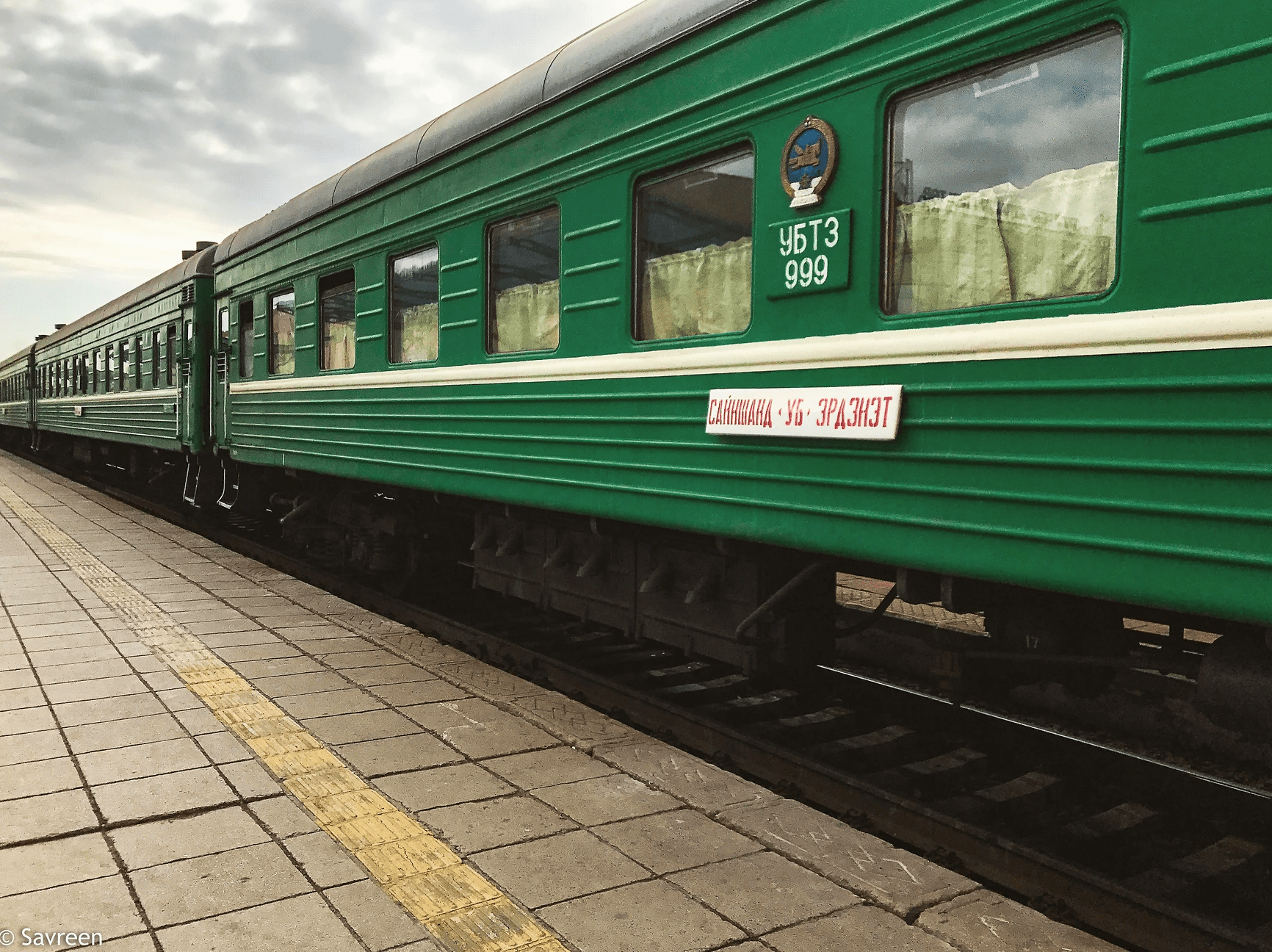 High numbers for a local train! The local Sainshand to Erdenet train captured by our guest Séverine Baptiste-Blanchart

On almost all Trans-Mongolian trains, unlimited boiling water is available free of charge from the samovar at the end of each carriage. Make sure to pack a mug and some cutlery (I love Sporks!). Coffee, tea, dried noodles and instant soups are all useful and help to provide an alternative to the rice and mutton that you will typically find in the dining carriage of a Mongolian train. Other ideas are granola bars, crackers, trail mix, peanut butter, dried meat and dried fruit. In the words of Man In Seat 61: 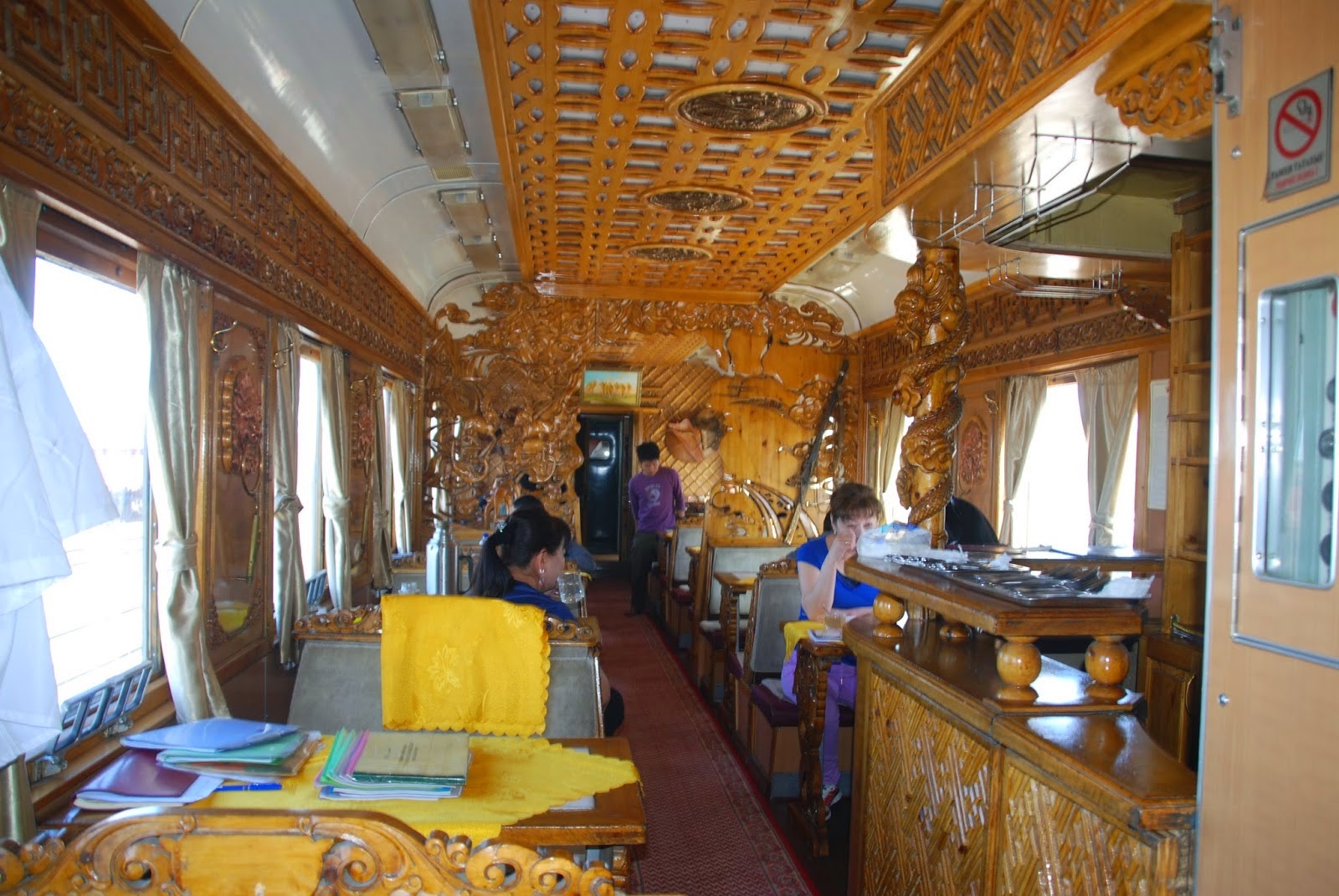 There will not be as many power sockets as you would like. Not when you consider nearly everyone on your carriage will have some electronic device that will need charging at some point during the journey. If you’re travelling on the whole length from Beijing through to Moscow bring a worldwide travel adaptor. In the words of Man In Seat 61:

‘All Russian, Mongolian & Chinese trains have shaver sockets in the corridor and washrooms which can be used to recharge things with the right adaptor.  Some trains have one or two similar sockets in the corridor that can be used to recharge things if you keep an eye on them.  Your carriage attendant may be willing to charge items using the socket in their own compartment, for a small tip.’

The views are epic. But, if you know you’ll need something to break up the window view, buy a copy of the Trans Siberian Handbook by Bryn Thomas which has a mile-by-mile guide to the sights you can see from the train. 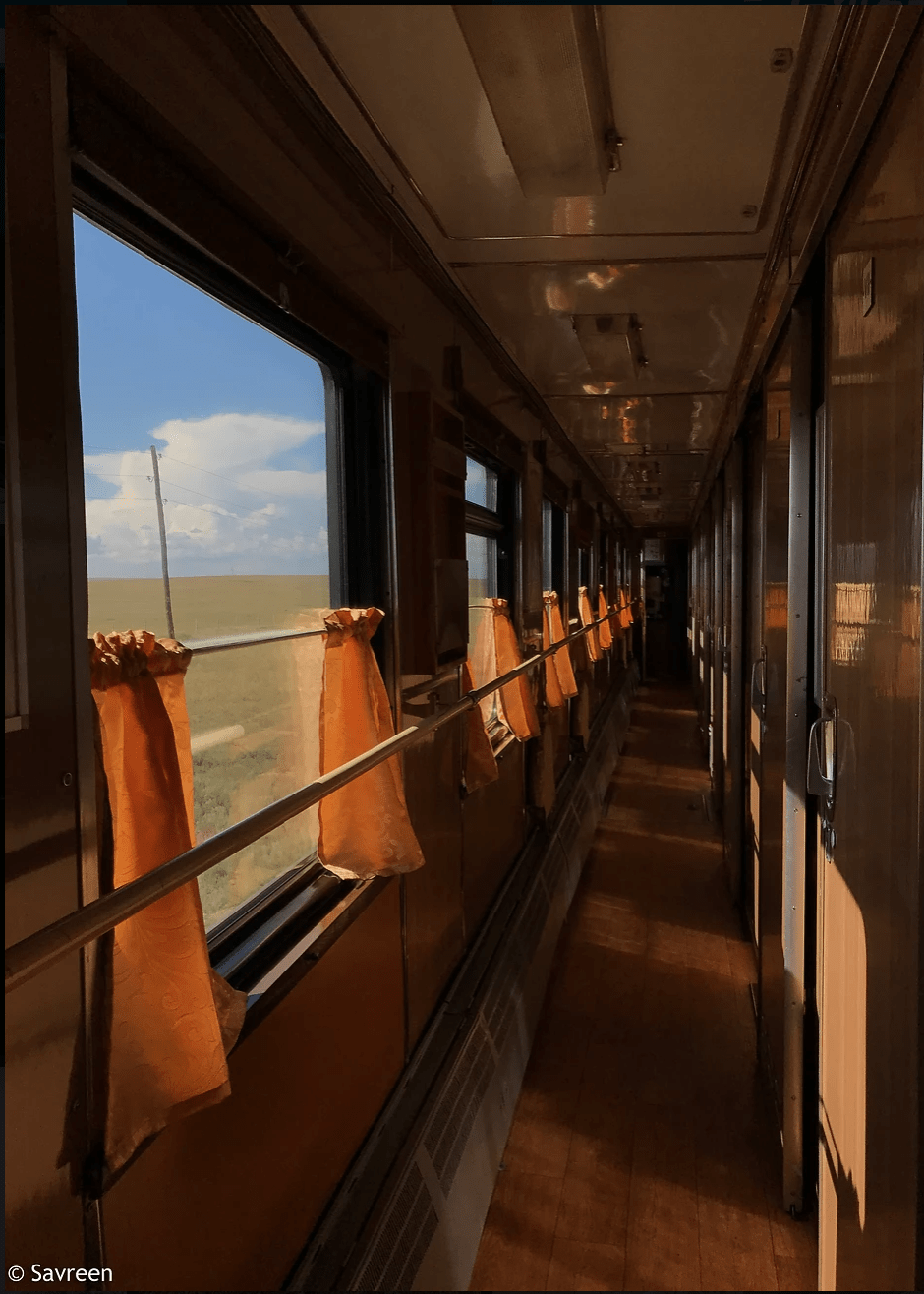 Image by our guest Séverine Baptiste-Blanchart

No shower. That clears that up. Well, that’s not quite right. If you’re travelling first class (2-berth) on the Trans Mongolian Moscow to Beijing train (train number 3 and 4) there is a shower provided in the private washroom shared between each first-class berth. Don’t get overly excited, a power shower this is not – more a thin hose pipe. But, if you’re travelling long-distance on another train or class, grab some hot water and your mug and have a mini-shower in the lockable toilets.

Each carriage has two western-style toilets – one at either end. Both with a sink. Although it depends on the carriage attendants (provodniks),  the toilets are kept surprisingly clean. Not spotless. But not necessarily as bad as you can imagine. There should always be toilet paper supplied … but … bring your own. 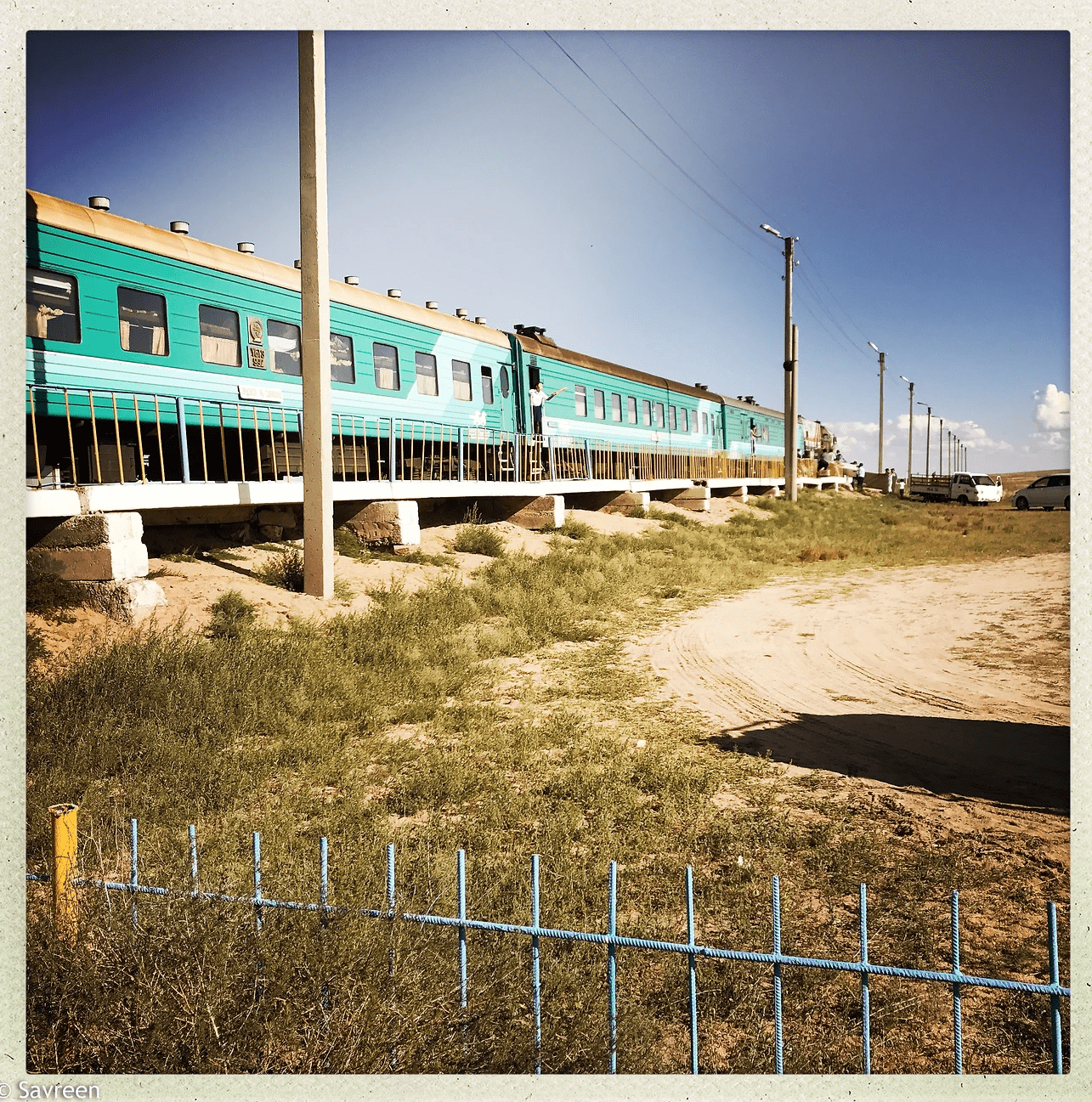 ‘The rail journey from Beijing was twenty seven hours through first, tree covered hills, then the industrial plains of Inner Mongolia before reaching the China/Mongolia border at 10pm. Here we waited for three hours while our papers were checked and the wheels on each carriage changed to fit the smaller tracks of Mongolia. Evidently the change of track gauge is to protect national borders, trains loaded with troops and artillery could not force their way through border control.  We arrived in Ulaanbaatar in the early afternoon. It is an old city yet has a feel of impermanence. Things change regularly, and the dust of the desert blows through the Main Street. There is a sensation of being at a frontier. Buddhism and Shamanism are the belief systems of the country. The big blue sky, the land and the spirits being the focus for respect and devotion.’ Words by our guest Sovay Berriman and image by our guest Séverine Baptiste-Blanchart

Top Tip – Hop on and off it is not
It’s not that easy to do the Trans-Siberian or any of its extensions spontaneously. Booking your tickets and planning your route well in advance is essential for the summer, when lower-number (cheap) trains fill up quickly, and the higher ones can book out too—especially if you have a preference for high or lower bunk. You can linger in stops along the way (and catch different trains for a detour) if you break up your route and buy tickets for individual trips, but you can’t just board a train at whim – you must have a berth reserved for any train you take on the network. A big part of planning will be visas.
Top Tip – on longer routes, change into your train clothes
You might not expect a dress code but the dress code in relation to the Trans Mongolian (or Siberian) train means ‘train clothes’ – pyjamas or tracksuits and slippers (or indoor shoes). It’s more comfortable but also part of the etiquette of train travel.  Don’t sit on another passenger’s bedroll when you are still wearing your outside clothes. 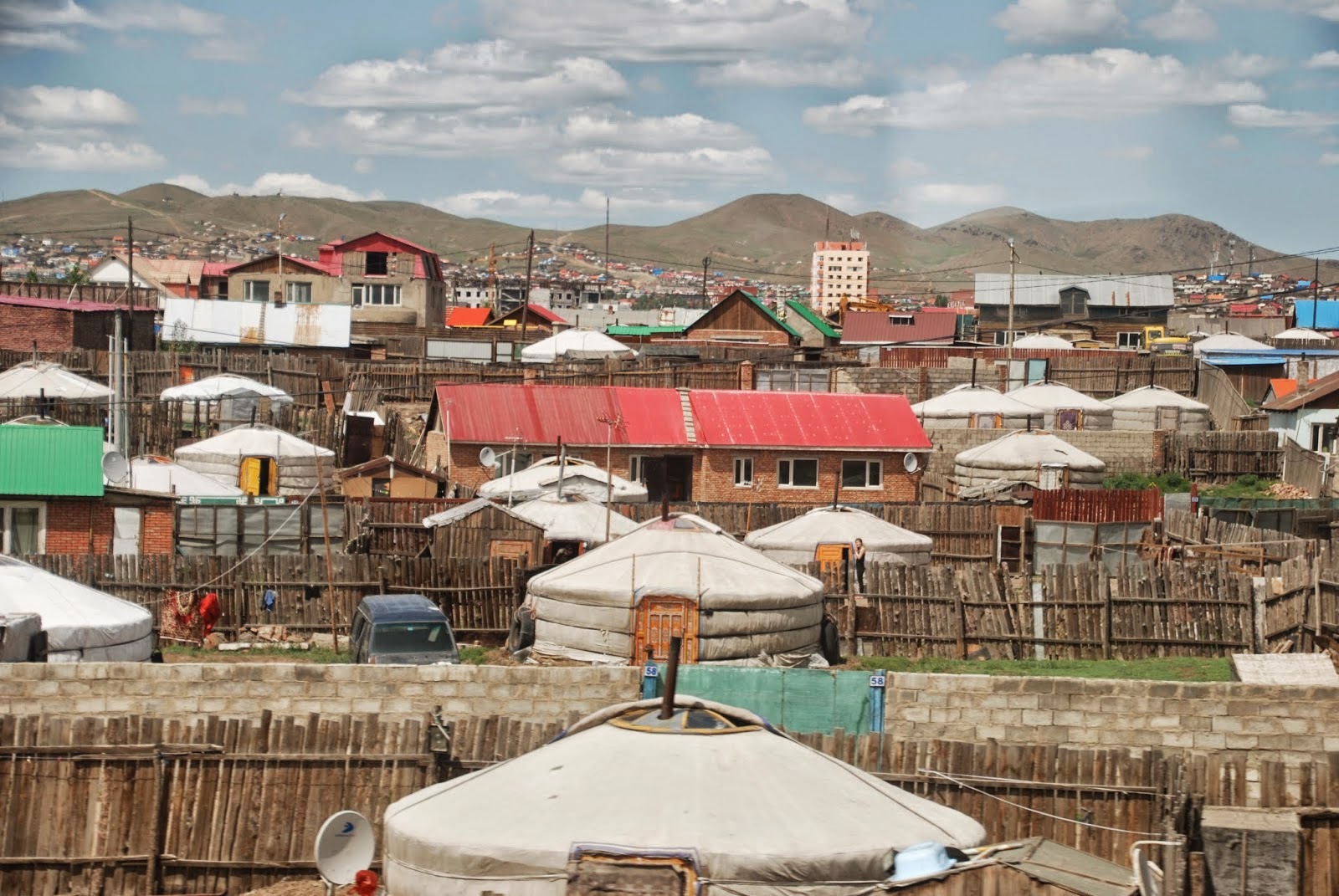 This is what you see as you come into Ulaanbaatar on the Trans-Mongolian railway. Look at the variety of housing. Mongolian laws allow every Mongolian 0,7 hectares of land. However this must be fenced in if it is to be legal and if the owner is to be allowed to send his children to school. What he does within his 0,7 hectares is up to him. There are very few planning restrictions so he can keep his animals, set up a small business, fill the space with gers, build a luxury house.Words and image by our guest Lynn McCaw

Firstly, get to know how many beds are in your class of carriage. 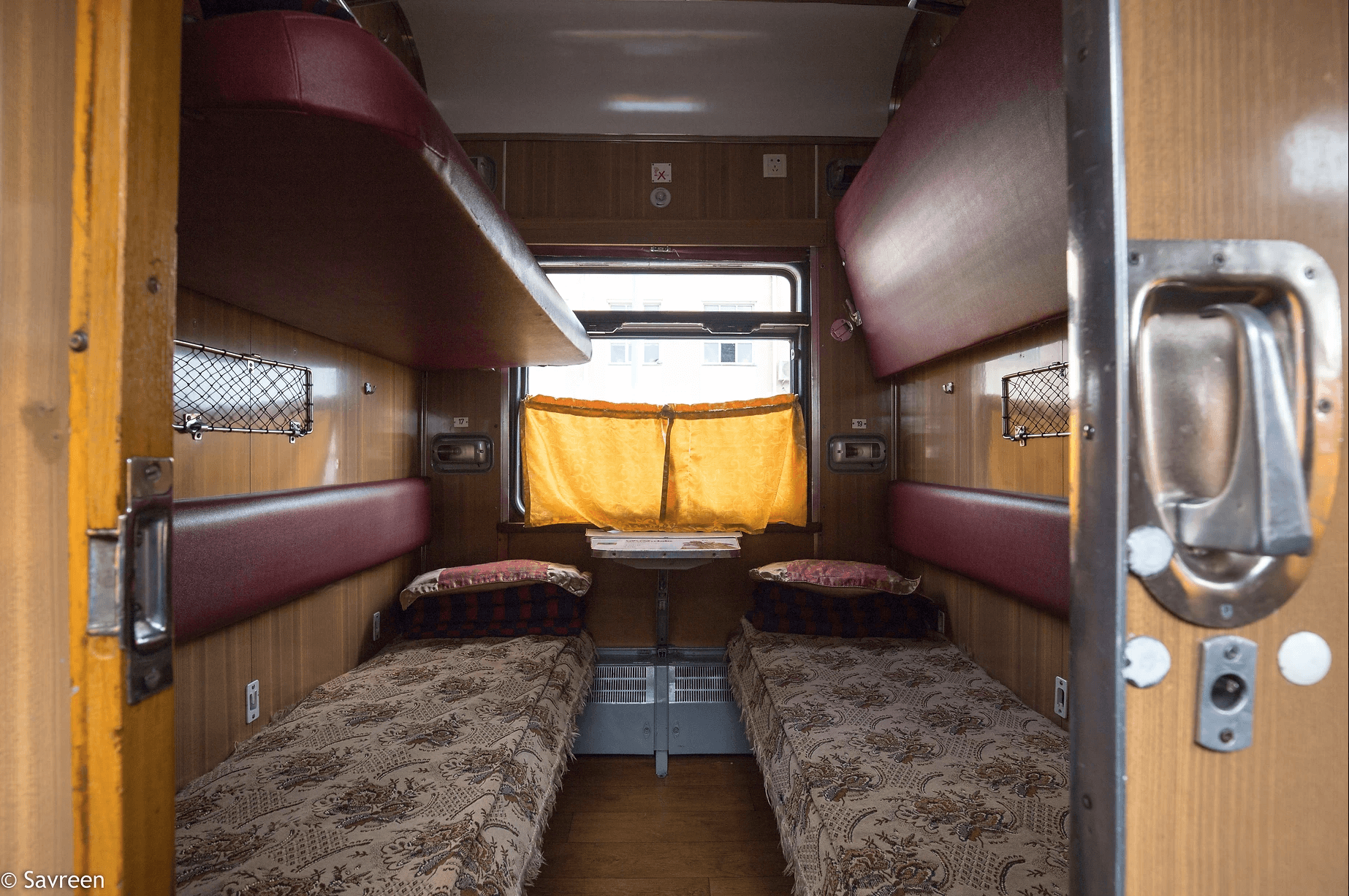 I (Jess) have travelled solo from Hong Kong through to Moscow and St Petersburg twice. Each time I travelled on a mix of second class and platskartny and although the compartments are mixed, as a solo female traveller I felt safe. If you end up in a compartment and don’t feel safe then speak to the carriage attendant and they might be able to move you. You need to use your common sense and remember to look after your possessions (putting them under the pillow doesn’t count!) 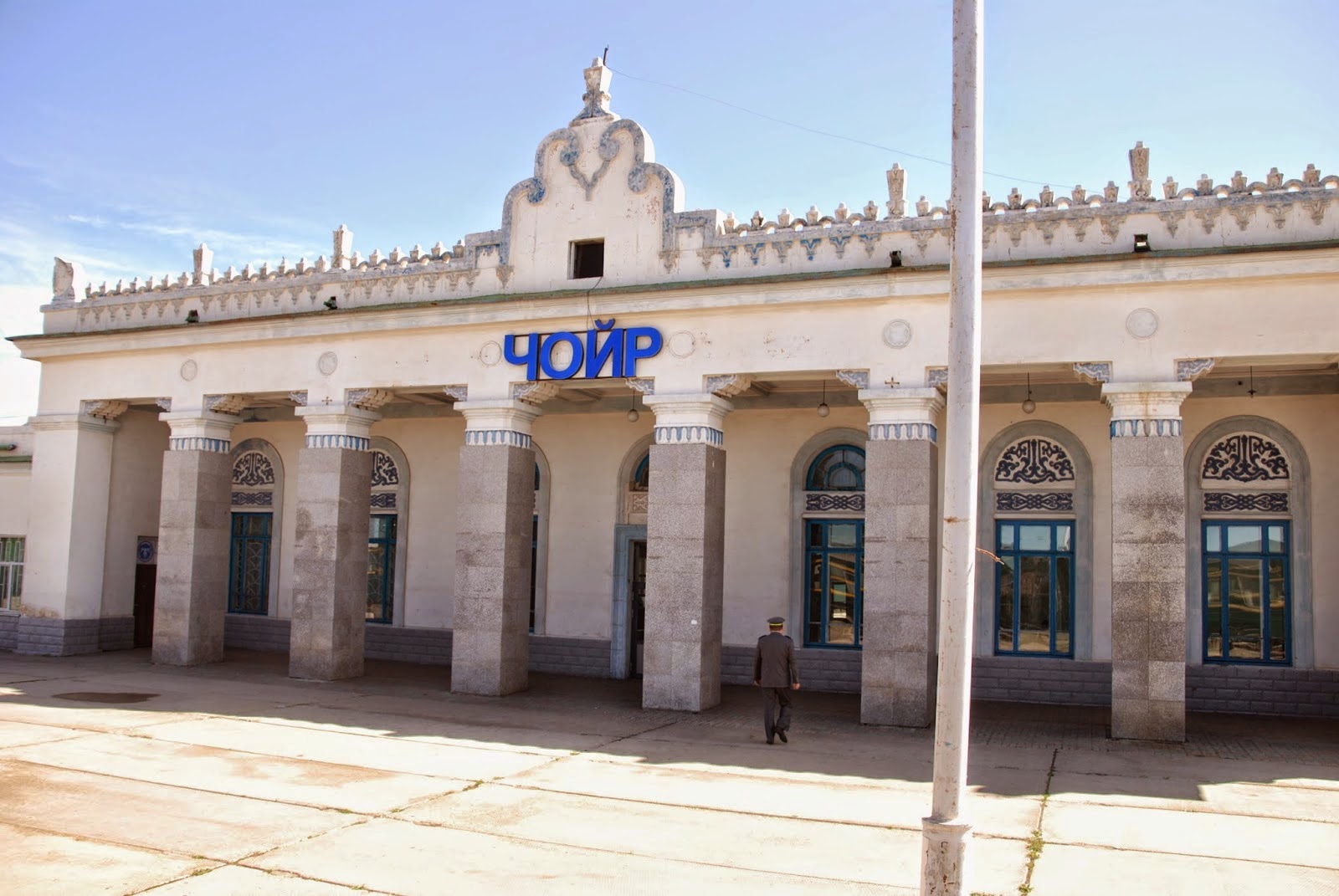 ‘As you pass through the Chinese province of Inner Mongolia (which as the name implies used to be part of greater Mongolia) the land flattens and the vegetation becomes sparse and dry and you begin to see the occasional ger and some livestock herds. This is the start of the Gobi Desert which stretches across the southern third of Mongolia.   Once you are across the border you are into the Mongolian Gobi. This part of the Gobi is not the “desert” of our expectations. There are no sand dunes. Just the elemental emptiness of rock, wide blue sky, burning sun, widely spaced tufts of scrubby, harsh grass on the rough pebbly ground.  Since the route of the train and the road are the main means communication in south-eastern Mongolia, following the ancient trade routes across Asia to Europe, there are occasional communities at which the train stops, featuring Soviet-era station buildings and Soviet-Siberian-style houses. There are also one or two vast brightly lit mining and industrial complexes.  As you get closer to Ulaanbaatar the landscape becomes more rolling hills and green pasture land. Gers and livestock herds become more frequent.’ Words and image by our guest Lynn McCaw

If you’re looking for information on how to book a trip on either the Trans-Mongolian then pretty much everything you could possibly need to know has been written by The Man in Seat 61. Alternatively, we can purchase tickets from Ulaanbaatar to Irkutsk and Ulaanbaatar to Beijing through a local agency run by the ever brilliant Ganbayar Davaajav – the owner of www.mongoliatraintickets.com. Due to his longterm connections with the train ticket office, his ticket prices are substantially lower than elsewhere. He can provide a ticket copy for any visa application requirements and does not need to be paid until you arrive in Mongolia – when he hands over the ticket. We receive no commission to recommend him. He just does an excellent job with excellent prices.

If you’re looking for a extension in Mongolia in between train trips, then take a look at our Trans Mongolian train extensions webpage.
Jess @ Eternal Landscapes 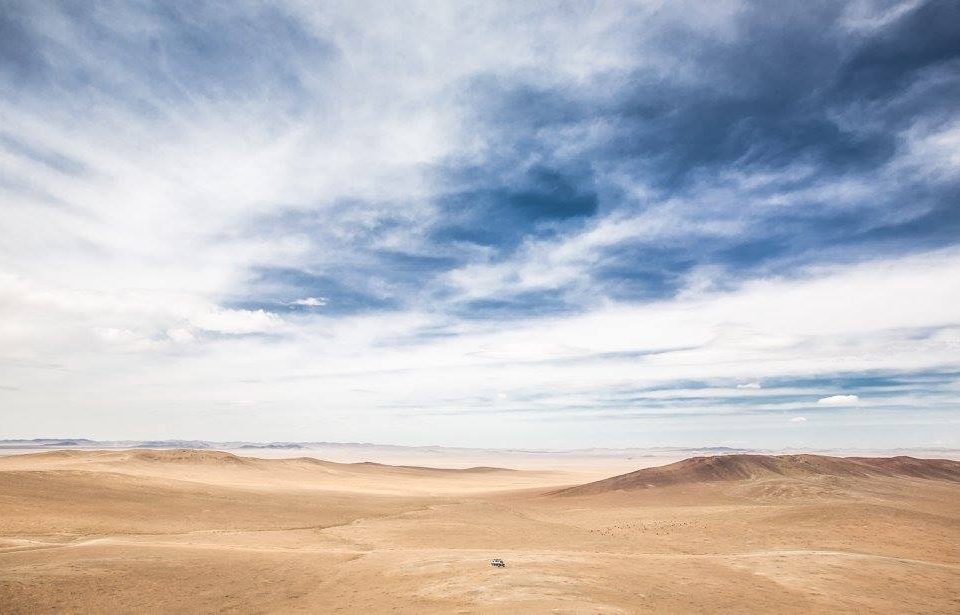 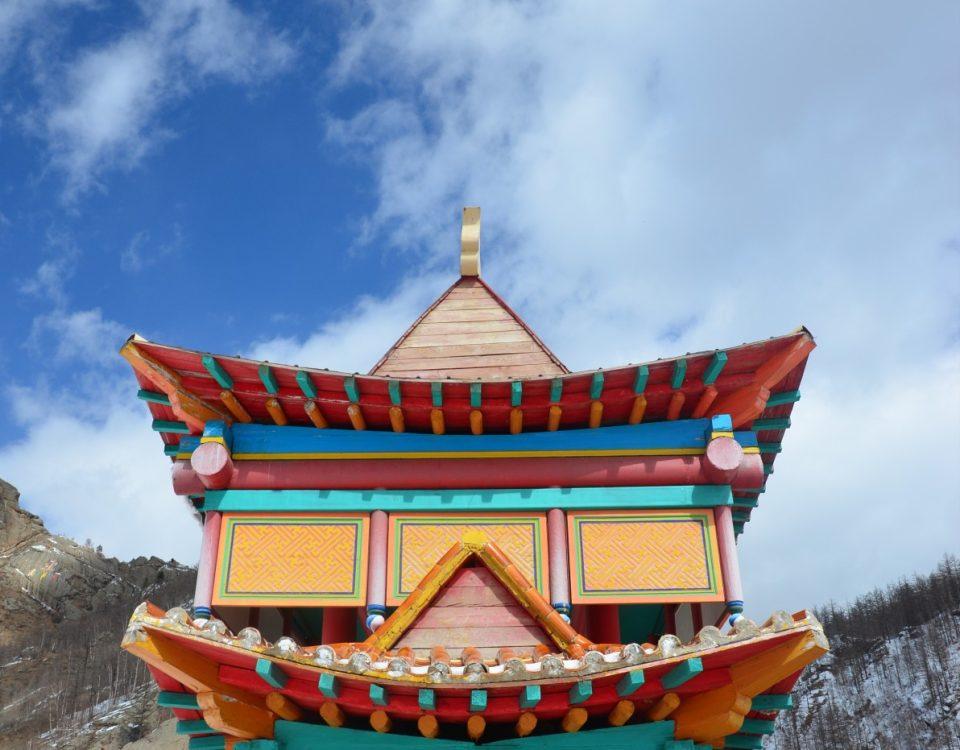 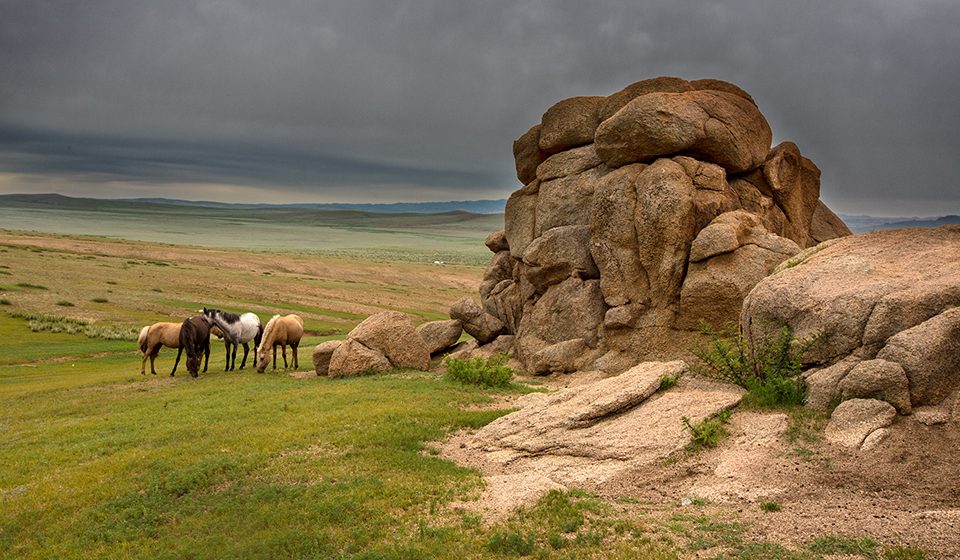