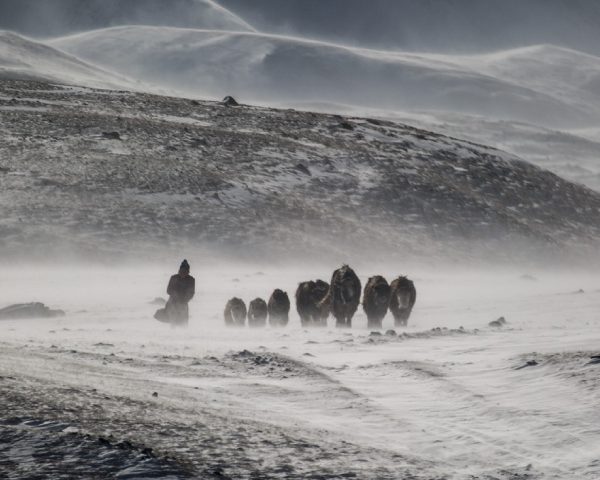 There are approximately 165,000 herding households spread throughout the vastness of  Mongolia – a country the size of western Europe. Between them are divided the 66 million head of livestock (Dec 2018) – known as the ‘five snouts’ of sheep, goats, cattle (& yaks), horses and camels. The size and make-up of herds depend on the individual family, their needs and the location including the type of pasture available.

Traditionally, Mongolia’s herders have grazed their livestock by rotating them over shared pasture according to the seasons and the health and availability of the grazing land available. The pastures are divided according to the season—summer, spring/fall, and winter based on the amount of grass and when the grass is sufficient to eat, which is often determined by geography, climate conditions and season. Simply put, herders stay in an area as long as there is enough grass.

Mongolian herders do not migrate randomly. Each move is a careful decision which includes reviewing the quality of the pasture. Each herding family is different on how often and when they move – some families will move many kilometres while others only move short distances. Herders continuously micro-adapt and in some areas or during certain years, herders may make frequent moves in a year, whereas in other areas they may move just a few times.

We work with the young Batsuuri family. Their home is in the Bayandalai district of the Gobi Gurvan Saikhan National Park. Their winter shelter is up in the protected foothills of the mountains and their summer pasture in the more open plains where rainfall turns the vast gravel plains into pasture for their livestock.  They typically make this migration in April or May. It’s a short migration of only a few kilometres but a migration pattern typical to the Gobi.

The spring (khavarjaa) and autumn (namarjaa) encampments are typically the most temporary. Summer encampments (zuslan) will usually have semi-permanent structures, such as milking pens and hitching posts. The winter encampment (uvuljuu) is always the most established, with shelters for the animals, storage huts and corals. Often in the summer, herders leave many possessions behind, because they travel in a smaller and lighter ger, with as little furniture as possible. In spring, herders go to pastures where the first herbs grow – spring is generally a time for migration from the depleted winter pasture.

The herders of the Darkhad Valley in northern Khovsgol herders often migrate to their winter pastures over the course of a few weeks in October and early November. The route follows through the mighty Khodrol Saridag – a 3000m plus mountain range. Some families spend the winter in the grassy mountain-sheltered valleys just west of Lake Khovsgol, but some make it all the way to the lake’s edge. Here they’ll wait out the long winter in view of Khovsgol Nuur before making the return journey in the spring. If you are visiting Khovsgol Lake during the summer you may come across log cabins and stock corrals – they may appear abandoned and overgrown but they are simply waiting for the return of winter occupants.

Sometimes in the summer a shorter more temporary migration called an otor is undertaken when a herder takes a makeshift shelter with them and pastures their animals at a distance from a central point. This is when (typically due to overgrazing or lack of rain), pasture is scarce and one or two members of the family will travel longer distances with their livestock searching for better pasture. The spring migration can be the toughest as the animals will be thin.

As Mongolian herder, you live your life through the lunar calendar – all your activities are typically conducted on ‘auspicious’ days. In the Mongolian lunar calendar, there are favourable and unfavourable days according to the combination of elements: earth, air, fire and water. Herders look at the lunar calendar to look for a suitable (positive and auspicious) day on which to move their herds. However, Kazakh herders in western Mongolia typically have a set date on which they move. 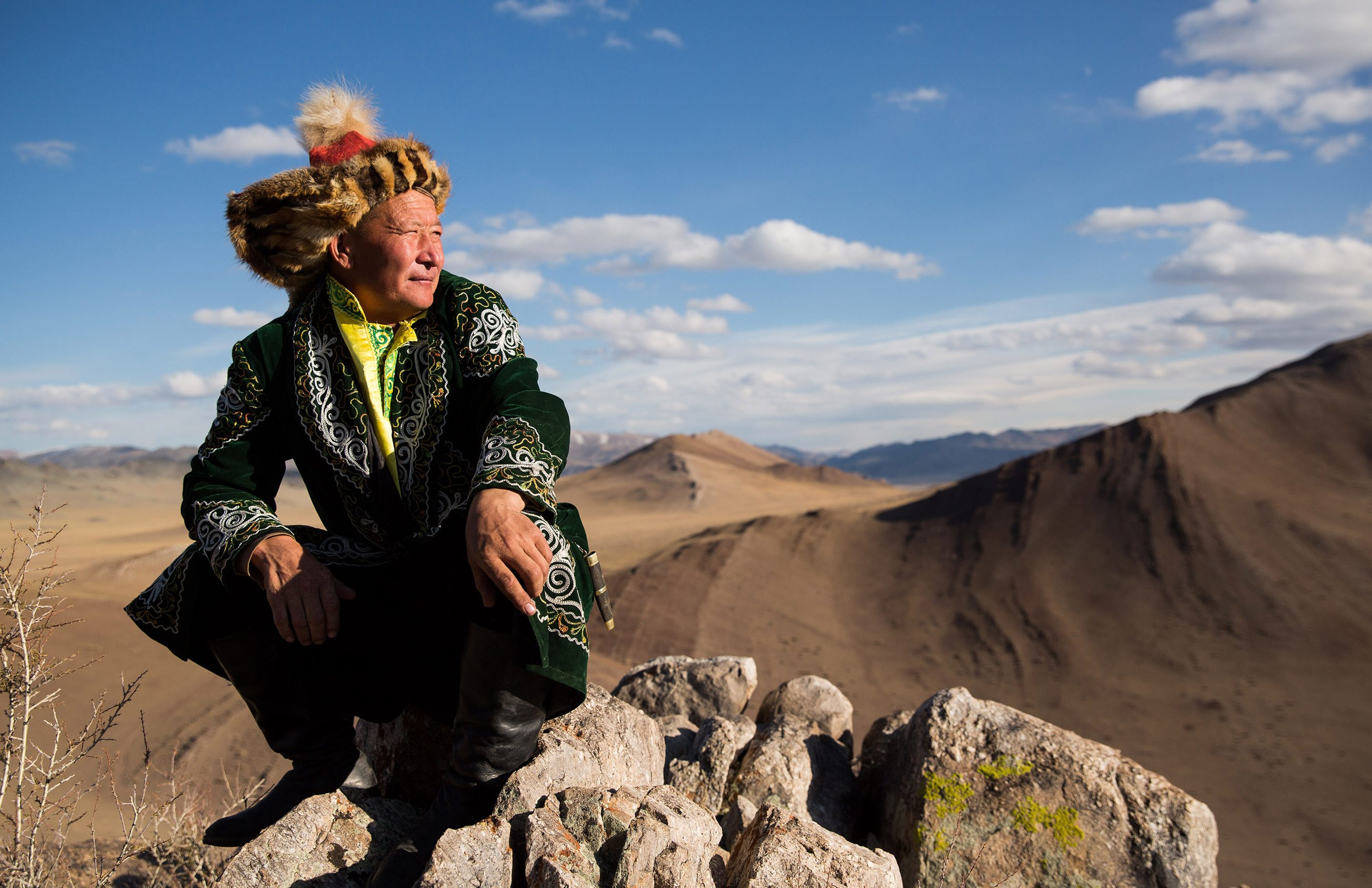 The work starts early on migration day. Not only is the family ger dismantled but the animals have to be rounded up – although they often migrate in their separate herds. Often the animals seem to know the routine – after all, migration is a cyclical routine.

Men traditionally rode on horses, Women rode on horseback or on the pack animals. Bactrian camels or yak or horse carts were traditionally used to move possessions. Everything is loaded: ger parts, carpets, pots and pans, shelves, stoves. Now, if the famly has access to one, trucks (or even a Prius car!) are used for moving the ‘home.’ (The herding way of life in Mongolia is very pragmatic, balancing traditions in combination with aspects of modern life that help to make their life easier and more efficient.)

The herding families don’t need to rely on maps or GPS devices; they use the sun, the shape of hills and mountains and landmarks to find their way.

Some families – maybe those with children of school age or older herders – give their livestock to a family member or another family to look after for the winter as they move into small towns to allow their children to attend school or for the elderly herder to have access to a medical service.

The herding families that we work in long-term local community partnership with all migrate and it would be possible for you to join them in one of their seasonal migrations. However, there will be hardships. Remember that herders do not change location for their own personal comfort – they move for the well-being of their livestock.

You’re on ‘nomad’ time and all schedules go out of the window. You’ll move at the speed dictated by the herd, the migration route and the family. Be prepared for changing (and sometimes challenging) weather conditions, basic shared accommodation and changing terrain. We expect you to leave your expectations and preconceptions behind. However, if you’re prepared to be flexible and open to all experiences you’ll start of as a stranger but will leave with a sense of true friendship.

If you are interested in joining one of our families to experience a Mongolian nomads’ migration, do get in touch. For more inspiration on the types of experiences we offer, look at our Mongolia tours page. 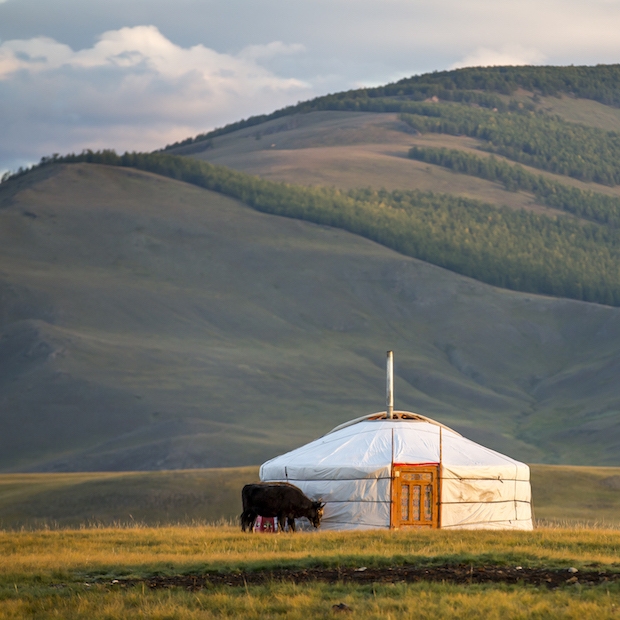