As we face ahead to a new year, what better way to say goodbye to the old one than with a review of a few of our 2015 Mongolian adventures and achievements.

As part of their Scott Davis and Cheeseman Ecology Safaris trip arranged by Eternal Landscapes, two guests were married during a traditional Kazakh ceremony. This took place at the home of Janatkhan – one of the Kazakh eagle hunters we work with.  The landscapes of his autumn home in the small community of Bugat in Bayan Ulgii provided the incredible backdrop. 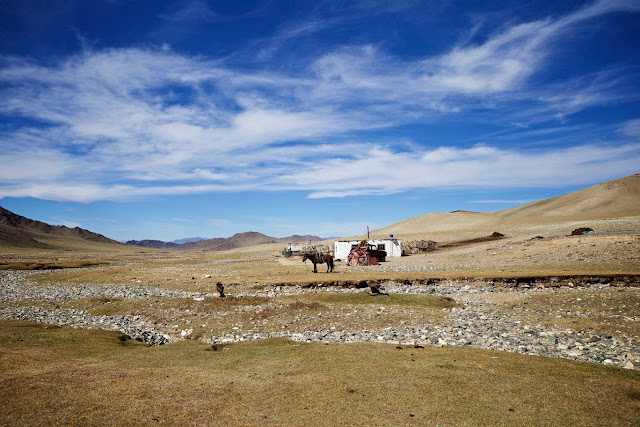 Janatkhan’s autumn home. You can see his Golden Eagle as a small dot in the foreground! Image by our guest Therese Faller 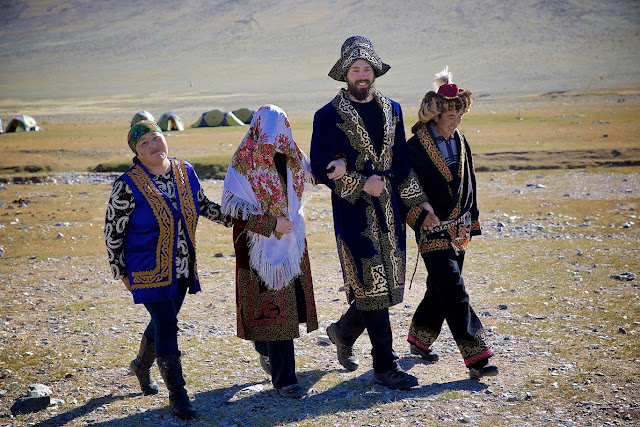 Image by our guest Therese Faller 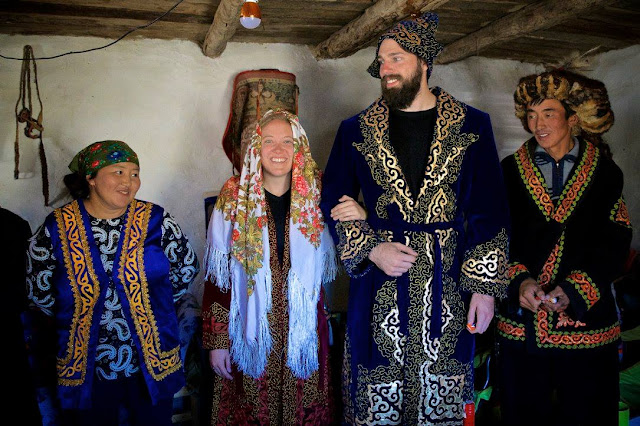 This image was taken after the  Beshtar (uncovering the face) part of the ceremony. Beshtar is always accompanied by the traditional Kazakh zhyr-song and this was provided by the Kazakh officiant on his dombra (a traditional Kazakh instrument). Image by our guest Therese Faller 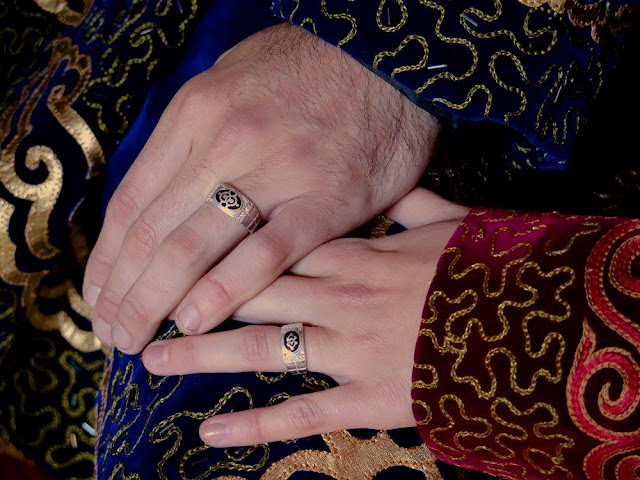 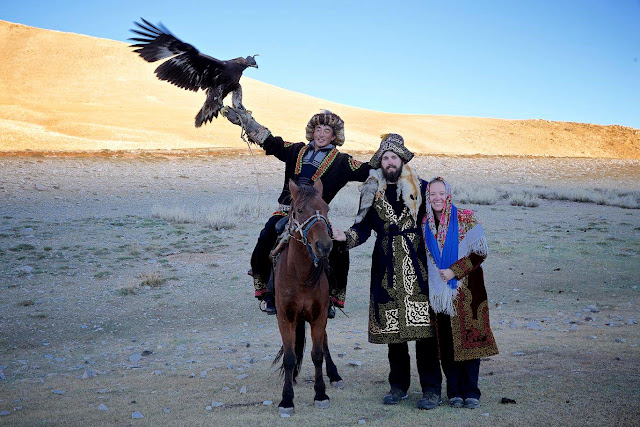 The fox around the groom’s neck is a Corsac Fox caught by the Golden Eagle belonging to Janatkhan. It was given as a gift to the married couple. Image by our guest Therese Faller 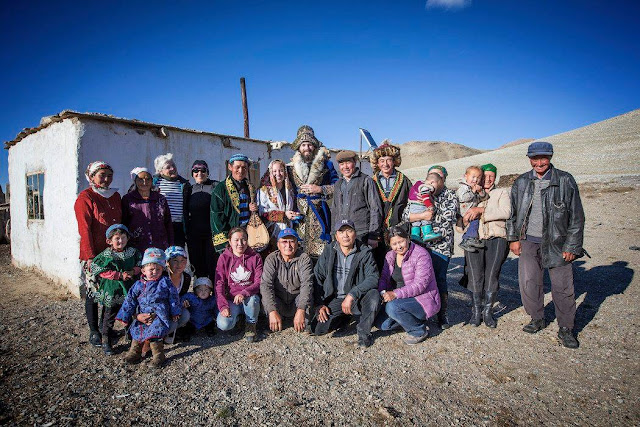 Image by our guest Therese Faller

For our 2015 Tsagaan Sar Insight trip, we were joined by guest Ross Briggs. Here he is with Turuu, both dressed in their Tsagaan Sar dels (traditional Mongolian coats). 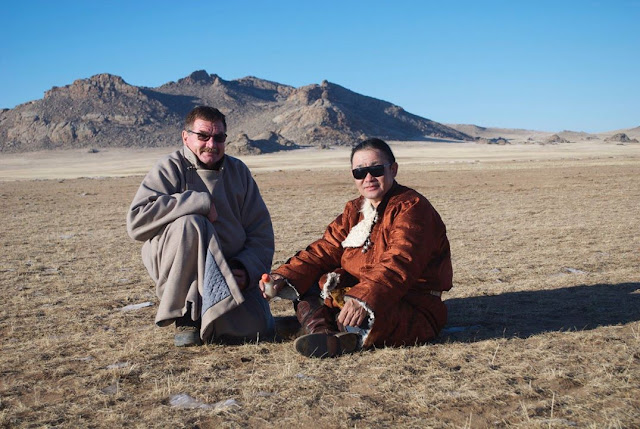 For sunrise on New Year’s Day (Shiniin Negen), Ross and the EL team rose in the early morning dark to observe sunrise at Tsagaan Suvraga in the middle Gobi. They then spent the rest of the day observing the traditions of Tsagaan Sar at the home of the Zorgio family who are primarily camel herders at Tsagaan Suvraga.

What did Ross have to say about his experience?

‘I have enjoyed this trip immensely. Turuu and Enkhee have taught me so much. I have a greater understanding of Mongolia and the people.  I have observed the closeness and strength of families and see the strength of Mongolia.’ 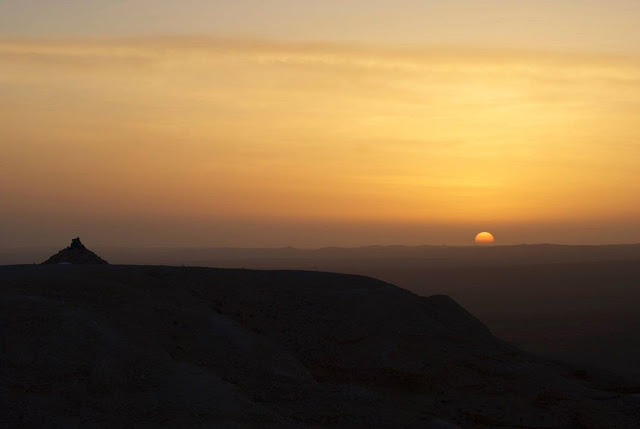 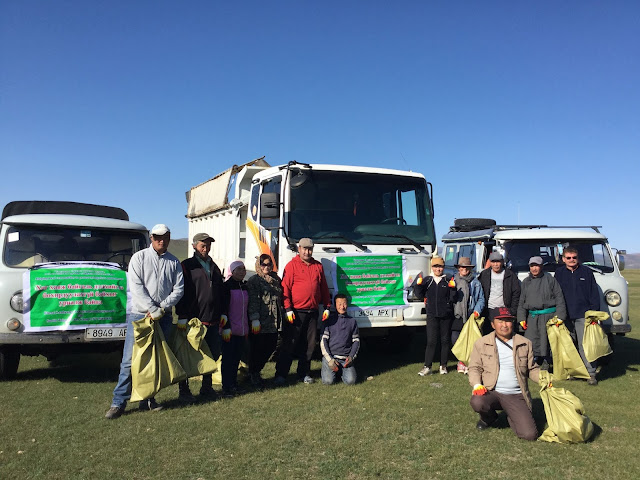 The 2015 Start Line – together with national park rangers, community members and the EL team

Unfortunately in Mongolia (as with elsewhere in the world), there has been a noticeable increase in the amount of rubbish that is discarded. A majority of our clients commented on it so Turuu and I decided to do something about it … and make it part of our Responsible Travel philosophy and a feature of the EL calendar – https://www.eternal-landscapes.co.uk/annual-community-national-park-clean-up/

Since 2014, Turuu and I have arranged for members of the EL team and local community members of the Tariat community in Arkhangai Provicne to spend two days clearing the north-shore (and surrounding area) of Terkhiin Tsagaan Nuur National Park. Much had been achieved including camp grounds, shore lines and surrounding steppe and forest land being cleared of rubbish. 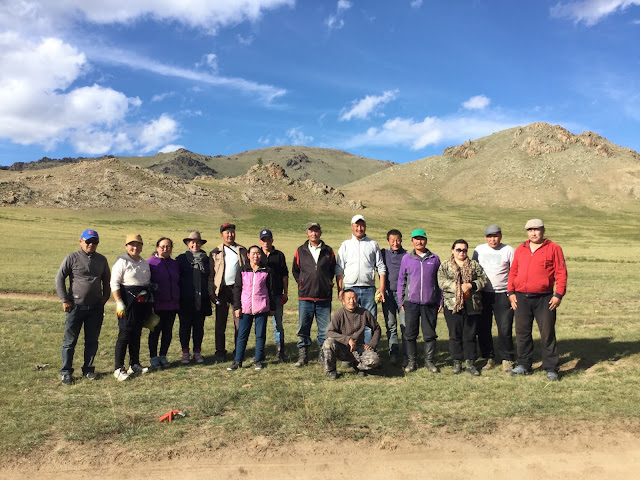 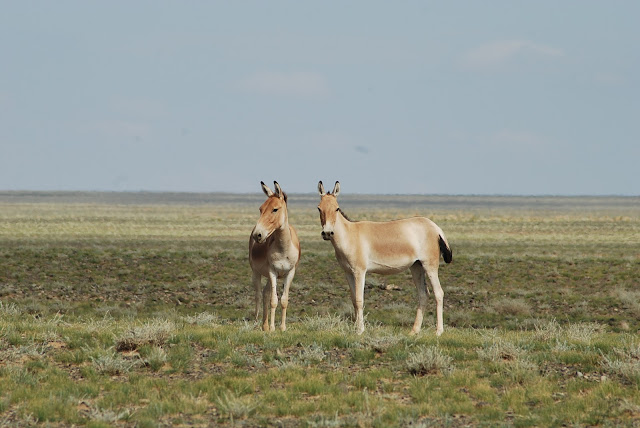 We spotted this beautiful pair in the southern Gobi Desert, close to the Khongoryn Els sand dunes.

It’s quite a serendipitous happening as we are working with Association Goviin Khulan – offering a Conservation and Research Expedition to Mongolia’s eastern Gobi Desert. 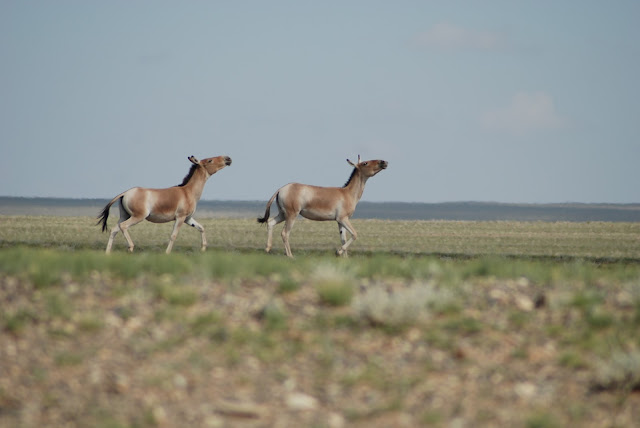 On September 4th, Asral NGO held a fundraising event in Ulaanbaatar. All EL team members that were in UB went along paid for by EL as a thank you for their hard work and also as a way of helping to support the work of Asral.

Asral is the Mongolian word for ‘care’ and was founded by High Tibetan Lama, Ven. Panchen Ötrul Rinpoche. In 1994 Rinpoche was invited by His Holiness the Dalai Lama to assist with the plight of Mongolian people after the collapse of the Soviet Union and thus Asral NGO was created.

I was invited to the Asral and Kunchab Jampaling Buddhist Centre in UB to have lunch with the Ven. Panchen Ötrul Rinpoche during his visit to Asral NGO in Mongolia. Why? As an acknowledgement of our continued support for the work of Asral. Over an informal lunch, we spoke of his work around the world, the work of Eternal Landscapes, the changes and challenges that the local people of Mongolia have and continue to experience since democracy, the positive and negative impacts of tourism in Mongolia and of our joint love for tea. There must always be tea! 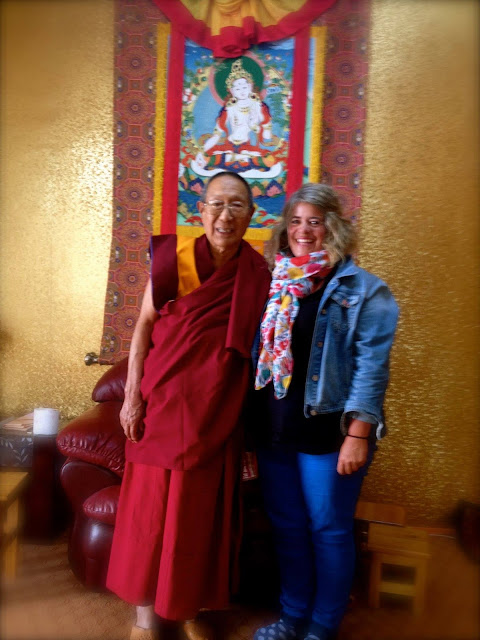 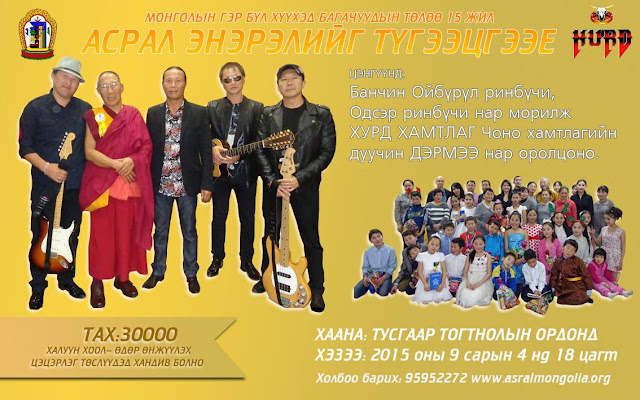 The concert event was supported by Mongolian rock group Хурд (Khurd). Formed in 1987 Khurd is considered ‘veterans’ of the Mongolian pop rock scene and have a huge following. They are considered to have greatly contributed to its diversification and encouraged the emergence of many new rock acts.

Picnic Of The Year

When? December 20th 2015. Temperature? Roughy -22 degrees. Location? Khustain Nuruu National Park. Although a majority of our competitors do close for the winter months, we don’t. We still offer adventures to the adventurous few who find themselves coming to Mongolia. Eternal Landscapes is a family as much as a team and we arrange events throughout the year that bring the ‘EL family’ together. 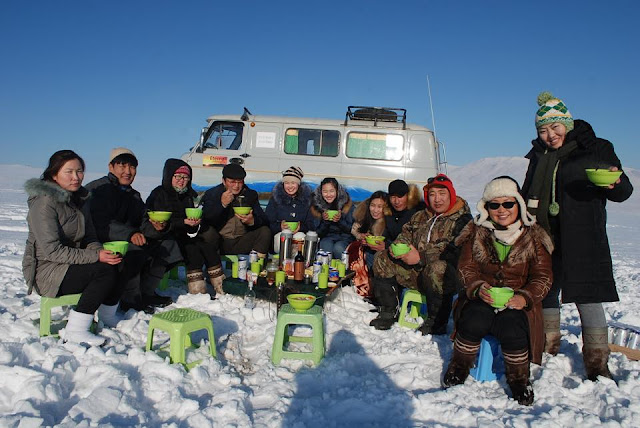 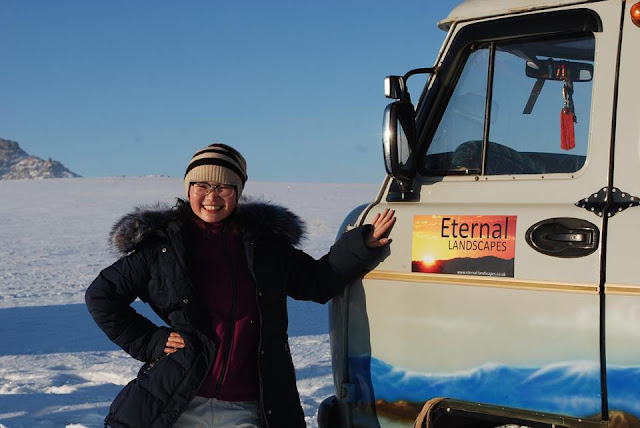 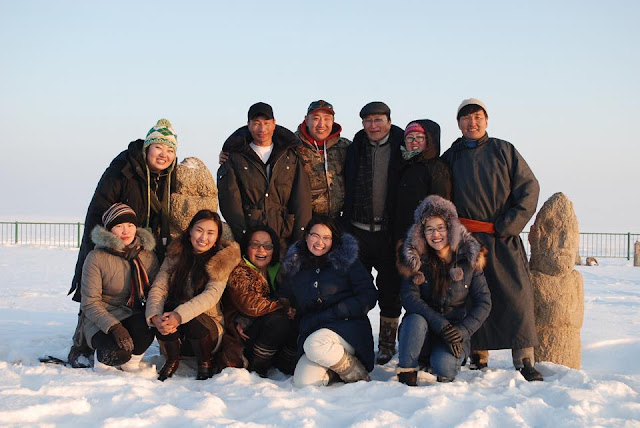