For a period of time, I was sharing a monthly round-up of news from Mongolia – choosing items that (in my mind) provided an overview as to the issues affecting the country as well as articles that provide an insight into the Mongolian culture.

I particularly like the broad spectrum of articles that were in the news in February (2015).

Discovery of the 200-year-old mummified body of a monk 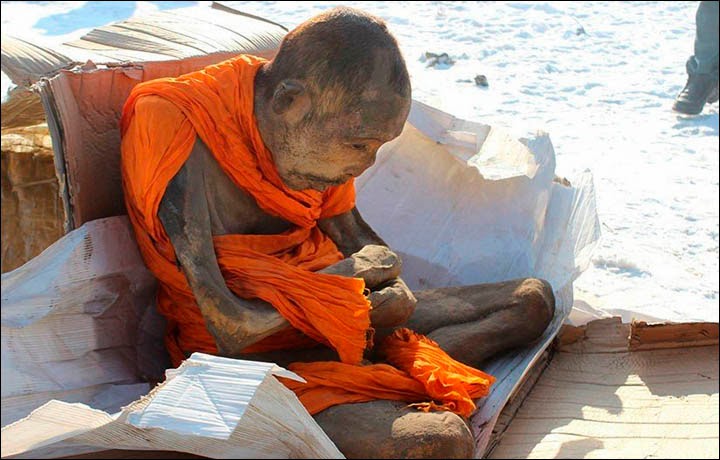 At the beginning of February, Mongolian and international news sources were running the story that a 200-year old body of a monk discovered in Ulaanbaatar, covered in cattle skin,  sitting in the cross-legged lotus position. There was speculation that the monk was not dead and was instead in ‘very deep meditation’ in a special spiritual state known as ‘tukdam’  that crosses over between life and death. But, this has proved to be unfounded.

From the Siberian Times article:

‘The Mongolia Morning Newspaper has reported that lead researchers are certain the body is that of a bearded religious man called Tsorzh Sanzhzhav, who lived 200 years ago. According to experts, he was a disciple of one of the greatest Buddhist teachers that ever lived and had been buried alongside his elder master until being stolen two weeks ago. It is now believed he was a student of His Holiness Incarnate Ovgon Geser Lama, who is revered in the region and whose grave is visited annually by pilgrims wishing to pray.’

The mummy has reportedly been sent to the National Centre of Forensic Expertise in Ulaanbaatar for further study. The remains will be cleaned and taken back to the mountain where he was originally buried.

BBC Singer Of The World 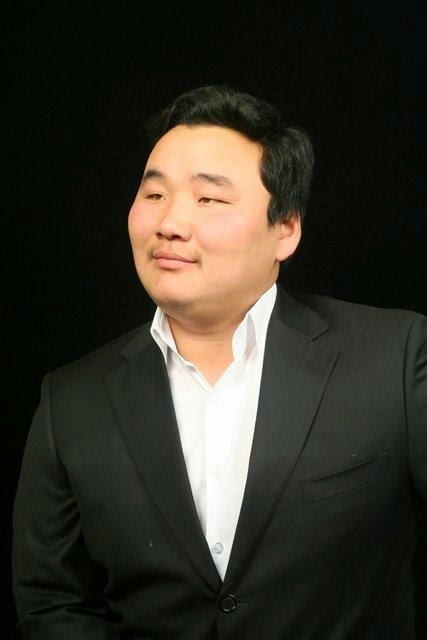 Every second year, BBC Cardiff hosts a Singer of the World competition. Mongolian soloist E.Amartuvshin has been selected as one of the contests 20 finalists.

According to an article in the UB Post, more than 300 singers from 55 countries applied to travel to Wales to represent their county. The final round of the competition will take place from June 14th to the 21st.

E.Amartuvshin was born in Sukhbaatar Province and studied at the State University of Arts and Culture. He is the principal soloist of Mongolia’sState Academic Theatre of Opera and Ballet. He was named a State Honoured Artist at the age of 24.

A bid by a Canadian mining company Centerra Gold to strip-mine part of Mongolia’s protected Noyon mountain forest is causing anger in Mongolia. The mine is being developed by Gatsuurt LLC, a Mongolian subsidiary of Centerra Gold (the largest Western mining company in Central Asia, with operations in the Kyrgyz Republic, Turkey, Mongolia, Portugal and Western Canada).

Located  between Mongolia’s Tuv and Selenge Provinces, Noyon Mountain is a funeral site of the Xiongnu elite with up to 230 burials. It is also on the tentative list for UNESCO World Heritage Site status. (The Xiongnu (Hunnu in Mongolia) created the first empire to be established by the nomadic people living in the grasslands of Central Asia. The empire stretched from Lake Baikal in Russia down to the Yellow River in China.)

The Mongolian government previously identified 15 large mineral deposits that have strategic importance for the country where the development of the mining industry should be focused on. Originally, Noyon Mountain was not included and was not among the additionally listed 39 potential strategic deposits.

However, Centerra has been trying to sign an investment agreement on the deposit, but its location brings it under Mongolia’s ‘law with the long name’  and thus disallows mining operations there. The only way out is to be named a strategic deposit, and this was why the company made a request to consider the deposit a strategic one.

(The ‘law with the long name’ in full is the ‘Law on Prohibiting Mineral Exploration and Extraction Near Water Sources, Protected Areas and Forests.’ The first version of the law was adopted in 2009, aiming to keep mineral extraction operations in Mongolia within an environmental framework that would ultimately protect Mongolia’s rivers and forests.)

In February, a demonstration took place in Sukhbaatar Square in Ulaanbaatar, which involved over 100 shamans. They expressed their opposition to mining exploration and exploitation at the site of Noyon Mountains and prayed for the protection of the mountain. 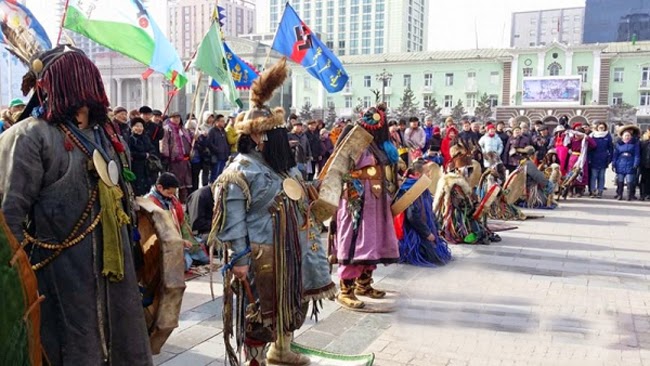 Members of the United Movement of Mongolian Rivers and Lakes (UMMRL) also initiated a hunger strike in front of the Mongolian parliament which lasted for 12-days until they were removed by Mongolia’s police force.

According to an online article in uranimum-network.org, the head of the Noyon Uul Protected Movement, O.Tserennadmid stated ‘State officials see the mountain as a vast amount of money and approved the Gatsuurt field as a strategic deposit. The approval process took place at night without us. We just can’t sit and accept it, we will go until the end. I am ready to give my life for my country.’

For more on this subject (including information on the impact of mining on Mongolia and its landscape), look at the Rivers Without Boundaries website. 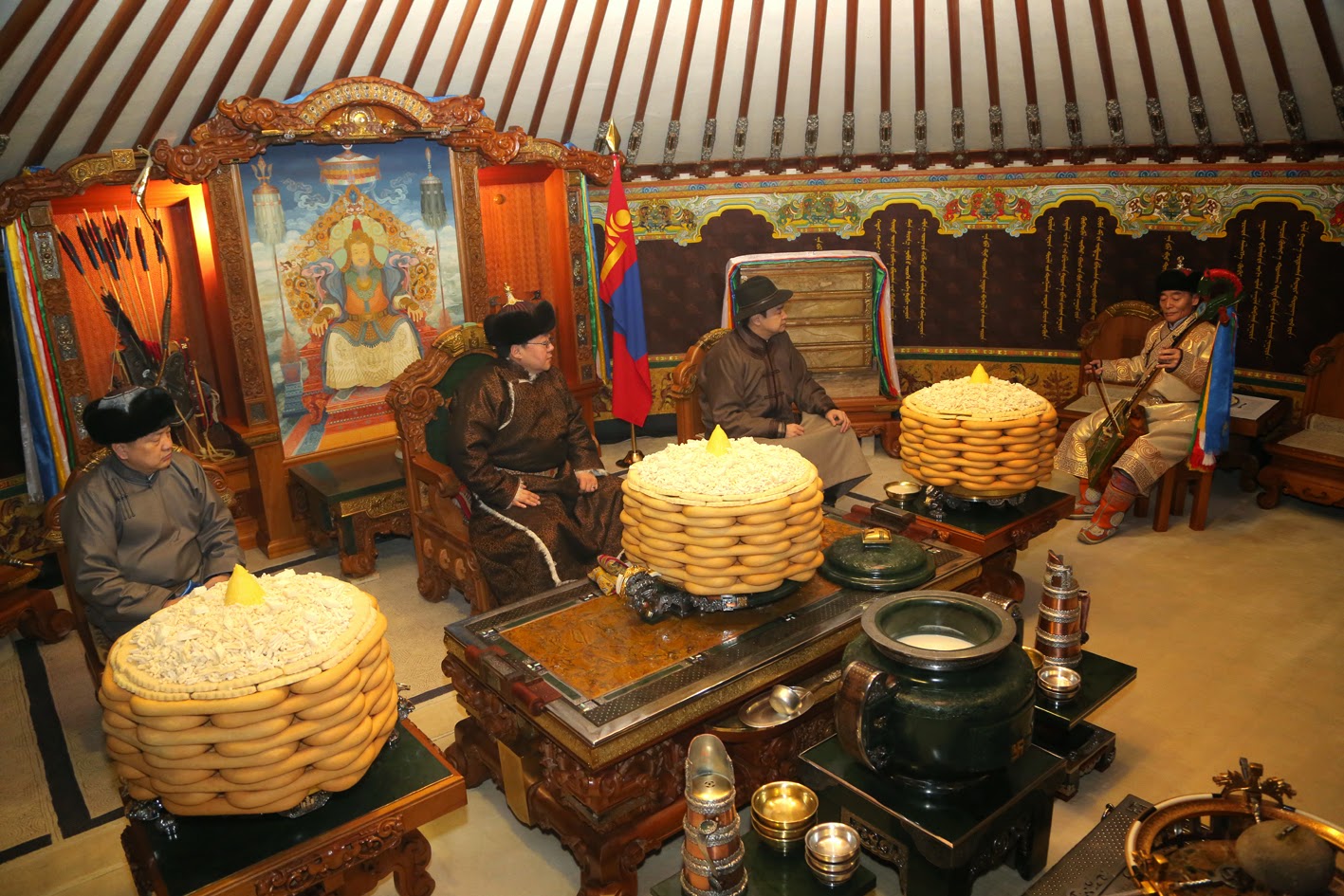 Tsagaan Sar (White Month) is Mongolia’s Lunar New Year. In the zodiac calendar, this year is the year of the ‘blue sheep.’ Uriankhai L Terbish is a State Honoured Scientist of Mongolia and an academic of the Mongolian Academy of Science

On the morning of the first day of the Lunar New Year, the President of Mongolia Ts.Elbegdorj paid tribute to the Statue of Chinggis Khaan and the state symbol of Mongolia, the Nine White Banners. Following the tribute, President Elbegdorj participated in the state zolgokh (greeting ceremony) at the State Ceremonial Ger Palace. The President also welcomed the nine oldest citizens of Mongolia to the celebration and showed respect by offering a khadag at the State Ceremonial Hall.

Our returning guest Ross has just returned from our Tsagaan Sar Insight trip ‘ I haven’t the words to describe this trip.  Turuu  at his best, Enkhee  just wonderful. I have learnt so much and now have a much greater understanding of Mongolia.  Thank you. Once again the leaving is hard.’ 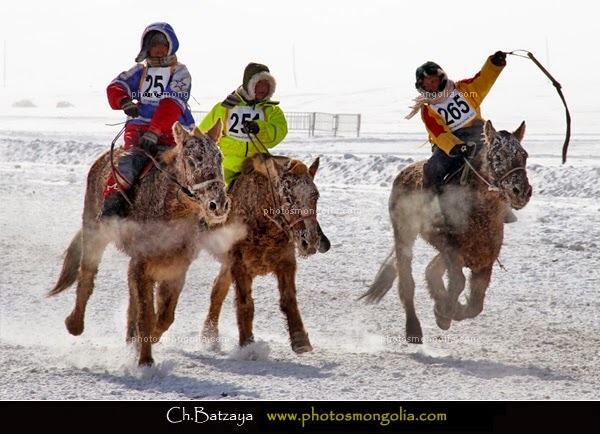 On February 28th, the first of Mongolia’s central provinces (covering Darkhan-Uul, Tuv, Selenge, Gobisumber, Dundgobi and Omnogobi) spring horse races took place – the ‘Dunjingarav.’ The race is arranged by the Federation of Mongolian Horse Racing and Sports and Trainers and took place in Tuv Aimag.