Mongolia is a trekking mecca – wild landscapes & endless horizons stretch before you in this sparsely populated land without boundaries. But, this is Mongolia and trekking in Mongolia is not like trekking elsewhere as there are no ‘official’ trekking routes. OK. So it’s not great for boasting to your friends as they won’t have heard where you have been, but does that really matter?

It is also vast – the size of Western Europe and as a result, your trekking region won’t necessarily have a large diversity of landscapes as you won’t be able to cover the distance to provide such variety. But you know what? That’s OK. Slow down and savour your surroundings.

Of course, there are always those that want to trek to the furthest, highest, remotest, or the most off the beaten track location. That’s fine but that turns the experience into a competition. For me, it’s the power of Mongolia’s ‘eternal landscapes’ that forms an integral part of any trekking journey here.

What I believe is that you should remove your watch and let each day unfold and enjoy the constantly changing shadows and light moving across the landscapes, the silence, meeting the locals, the stretching horizons and the joy of the great outdoors. And knowing that you are trekking in the least densely populated country in the world.

Here’s a brief summary of five trekking locations in Mongolia. But … don’t get tied down into what is the most authentic or untouched region to visit. Instead, embrace the words of this Mongolian proverb:

‘Man’s joy is in wide open and empty spaces.’

As all journeys in Mongolia traditionally go in  a clock-wise direction, so does this one: 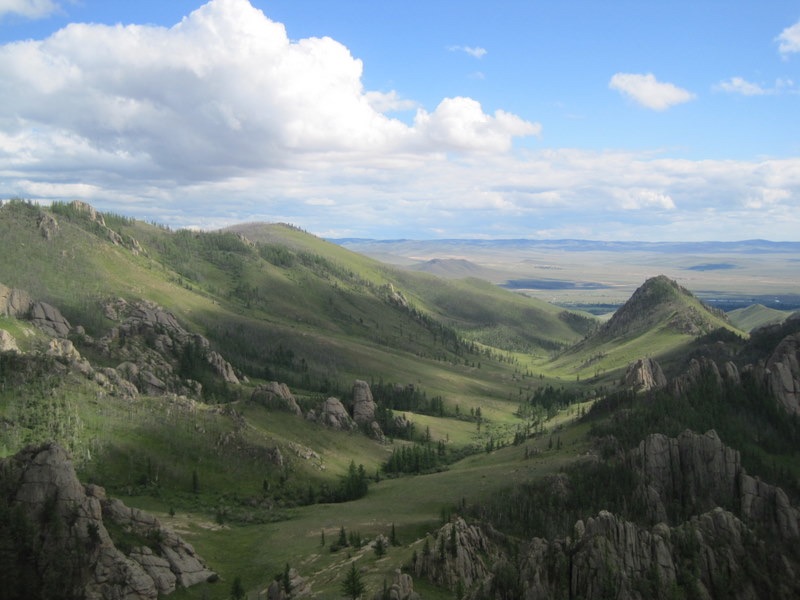 Yes, this is one of Mongolia’s most visited destinations. It’s bound to be as it’s located just 60km from Ulaanbaatar, Yes, it is included in many general tour itineraries but it doesn’t have to be about the ‘must see’ sights. The hinterland of Terelj is stunning to explore in its own right – especially if you’re prepared to trek just that little bit further. With a little effort you can explore habitats as diverse as river valleys, barren mountain tops, high open Mongolian steppe, coniferous forests of Siberian Pine and Siberian Larch and sub-alpine meadows. The region features abundant streams and springs. Horse and foot treks are both available. Great options for winter trekking as well. Just bring (good) thermals!

This is Mongolia’s largest national park located in the southern Gobi – a mountainous terrain rising out of the extensive desert plains and a region of incredible biological diversity. This mountainous region was formed by the same tectonic activity that created the Himalayas and is part of the Gobi Altai Range – the outer crumple zone of the Himalayan geological activity. Yes, you will have heard of places such as Yolyn Am (the Ice Canyon) but these are popular regions. Instead, explore the further more distance regions by camel (bring padded shorts) or on a foot trek.

The Khangai Mountains are one of the three main mountain chains in Mongolia and form the backdrop to the central heartland along with river valleys (the Khangai give rise to Mongolia’s major rivers) and both forest and alpine meadow steppe. Popular locations include Naiman Nuur (Eight Lakes) and anywhere surrounding Tsenkher Hot Springs. However, consider Tarvagtai National Park or Terkhiin Tsagaaan Nuur. 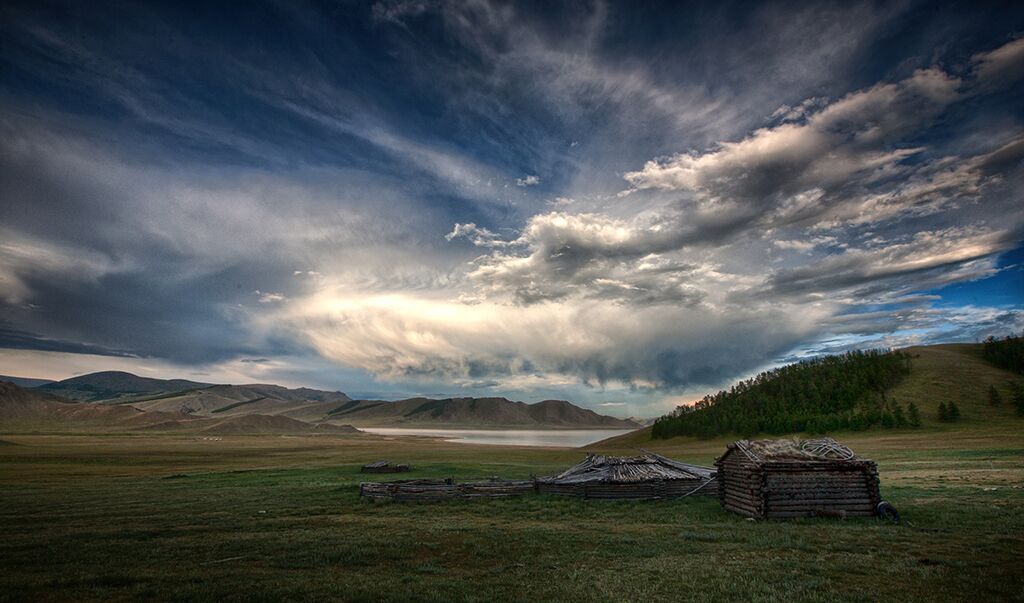 If you’re happy to travel further consider sacred Otgon Tenger  – the only mountain in the entire Khangai range to have a permanent glacier. The southern face is dominated by Mongolia’s most extensive granite wall. Mongolians consider the mountain to be the mystical abode of Ochirvan (Vajrapani), the fierce, dark blue protective deity of the Buddhist religion. 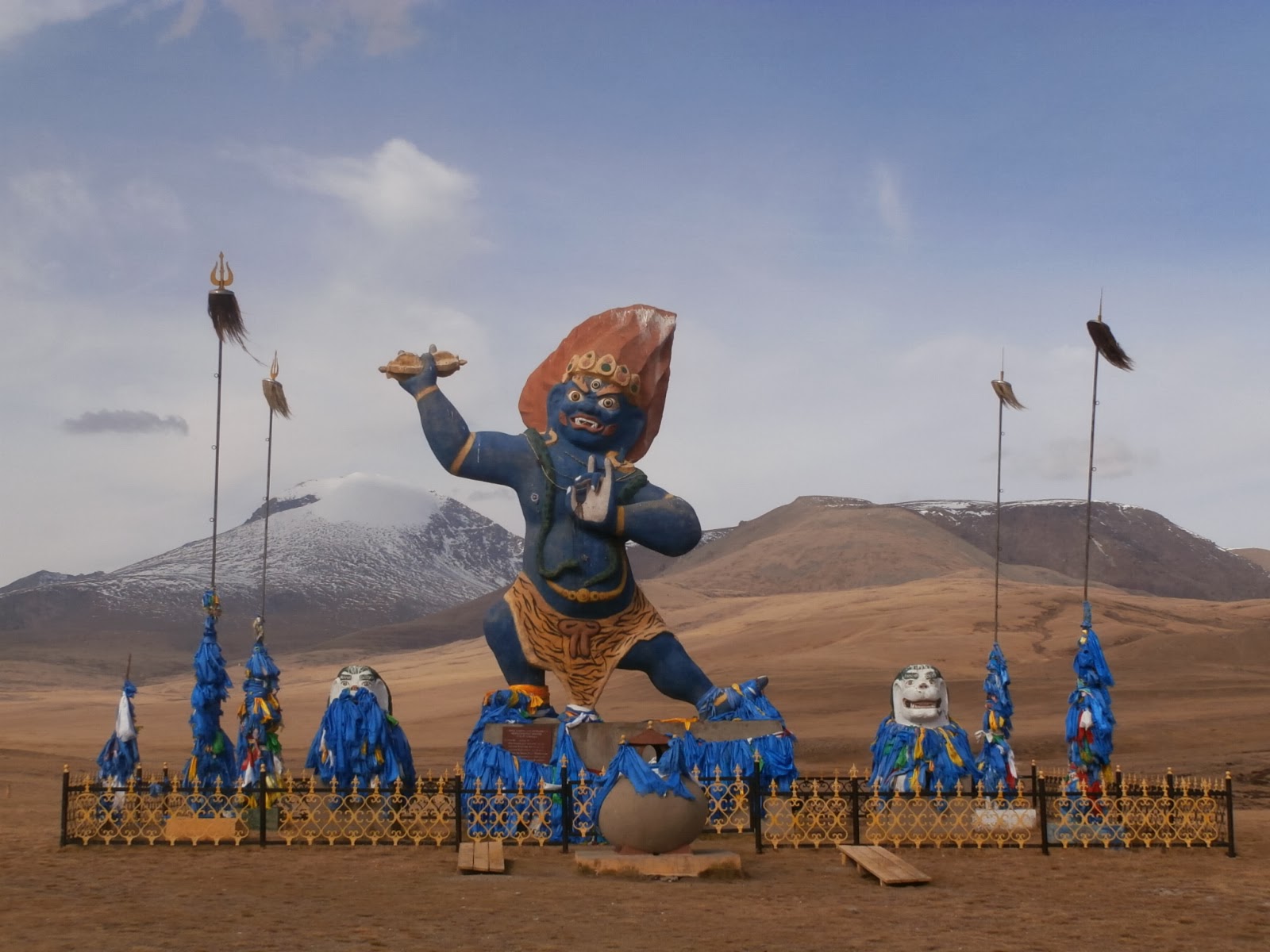 Mongolians consider Otgon Tenger mountain to be the mystical abode of Ochirvan – the fierce, dark blue protective deity of the Buddhist religion (traditional Mongolian beliefs have held that wrathful deities inhabit many of Mongolia’s sacred mountains).

Mongolia is one of the highest countries in the world. Did you know that? Over 80% of the country is over 1000m. So. A lot of the country provides epic views. But if you’re looking for a view of views then you may want to head to western Mongolia – more specifically the Altai Mountains.

Altai Tavan Bogd National Park – the Five Holy Gods – are the highest mountains in Mongolia, with Khuiten Uul (‘Cold Peak’) at 4374m being the highest. These permanently snow capped mountains form a bowl around the Pontanii Glacier. The other peaks are Nairamdal (‘Friendship’, 4180m), Malchin (‘herder, 4050m), Bürged (‘Eagle’, 4068m) and Olgii (‘Cradle’, 4050m).  But, this is a common trail so why not do something a little different and head to the small community of Altai in Bayan Ulgii and start a trek from there.

Khovsgol Nuur National Park in northern Mongolia is justifiably considered a highlight of Mongolia. But, there is so much more to it then just the lake. Biologists use the word ecotone for places where different habitats meet – where a forest meets a meadow or a lake meets a shore. Khovsgol is an ecotone on a very large scale. The result is a wide range of habitats – wet meadows, shallow ponds, coniferous forest, steppe woodland, open steppe, alpine meadow, high mountains and the lake and lakeshore. There’s so much variety in one location – everything from Mongolia’s largest freshwater lake (Dalai Ej – Mother Sea), to the remarkable Khoridol Saridag mountain wilderness and also the vast Darkhad Depression. 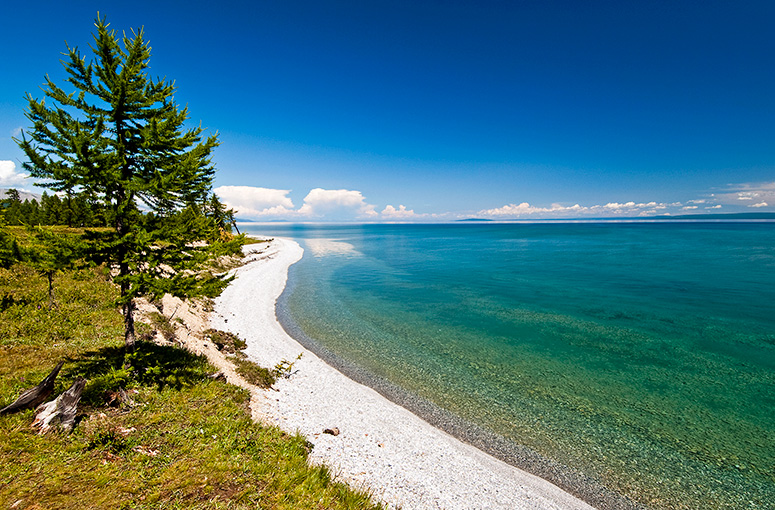 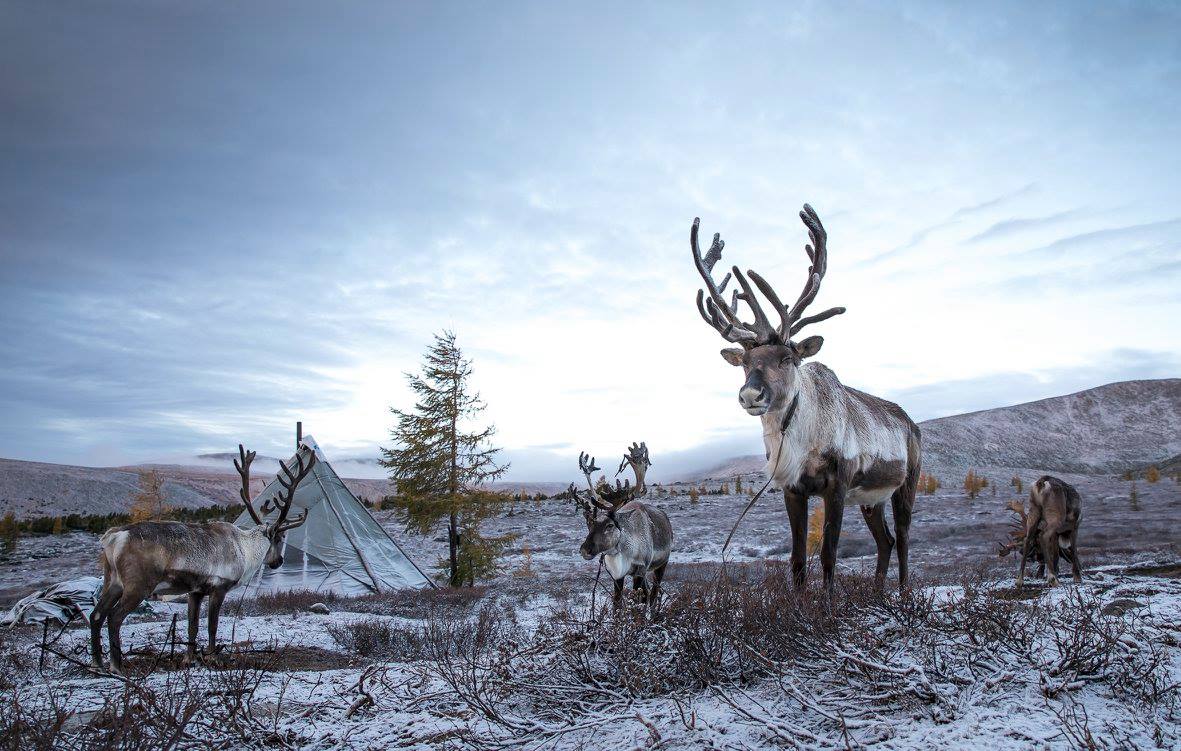 Reindeer belonging to the Tsaatan reindeer herders of Mongolia. The Tsaatan are also known as ‘Dukha’ and make their lives in the fragile ecosystem of Mongolia’s taiga in the Darkhad Depression

All three regions can be explored separately or combined on an extended trek and form a backdrop for either an extended horse or foot trek. Also works well as a winter escape (trust me!).

For more on our own trekking in Mongolia experiences, see this link – https://www.eternal-landscapes.co.uk/mongolia-tours/mongolia-trekking-tours/. Every year we put together our Mongolia trekking tours where we discover areas new to us and regions loved by us that we wish to explore further. The style of our Mongolia trekking tours/journeys influence our accommodation choices and therefore the amenities available. But a hot power shower couldn’t compete with the beauty and immensity of the landscapes through which you will trek.

Wherever you opt to trek and whether you go with a company, a guide or independently we have only one ask. Chinggis Khan himself decreed protection for Mongolia’s environment as part of his yasa, his collection of laws. Yes, you will see Mongolians being negligent and causing damage but, we’re visitors so should set a good example and follow the simple 7 principles of #leavenotrace (https://lnt.org/) 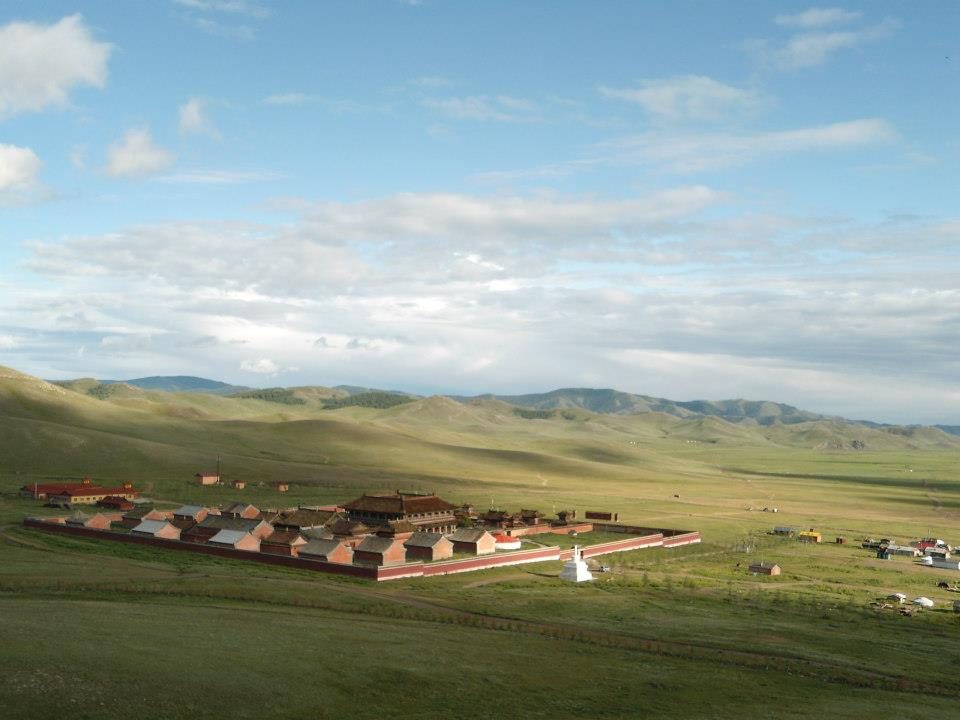 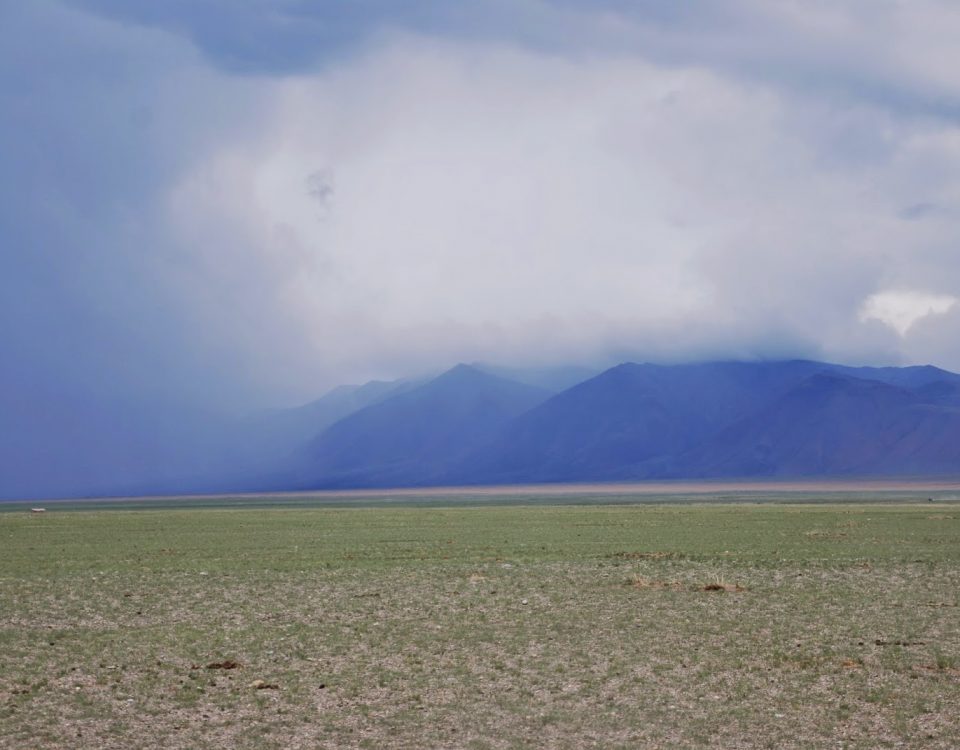