15 of my favourite Mongolian views

Food of the Nomads – Your introduction to Mongolian cuisine!

Here are 15 of our favourite Mongolia views. Because traditionally all journeys go in a clockwise direction so this one does as well. 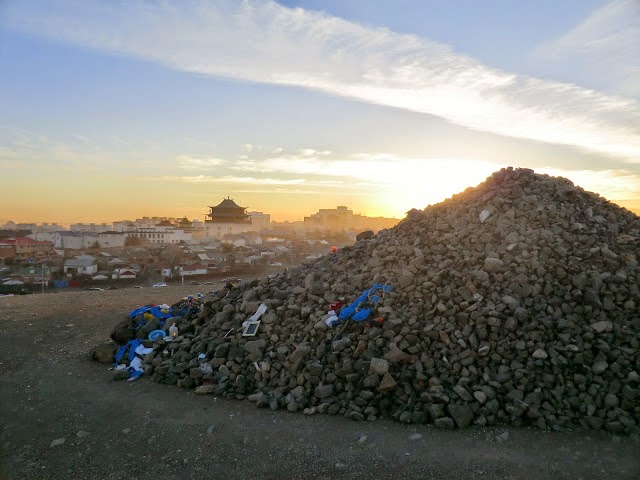 Strange inclusion you may think. However, this is one of our favourite views in the city – taken at Tsagaany Ovoo overlooking Gandan Monastery. The ovoo is connected with the monastery. Come up here and you’ll share the space with monks, local teenagers, a family and a whole heap of pigeons. It also gives you a great perspective on the city’s own unique Mongolian identity – a city of nomads rushing headlong into the 21st century. 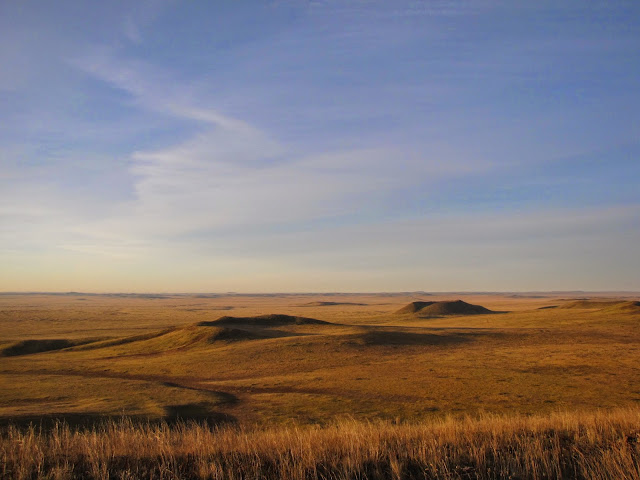 Western Mongolia is becoming more and more a popular destination. So where’s this? The wind-scoured lowlands of Dariganga in south-eastern Sukhbaatar Aimag. Inhabited only by Grey Wolves, White Tailed Gazelle and a few hardy nomads.   Here, at the location of one of Mongolia’s most sacred mountains, the grasslands of the northern steppe and the expanse of the Gobi converge to create a unique landscape consisting of basalt/cinder formations – all 200 of  them are extinct volcanic cones. This area, where the skyline is dominated by Shillin Bogd and Altan Ovoo is isolated, immense and stunning.  Image by our guest Mandy Wong. 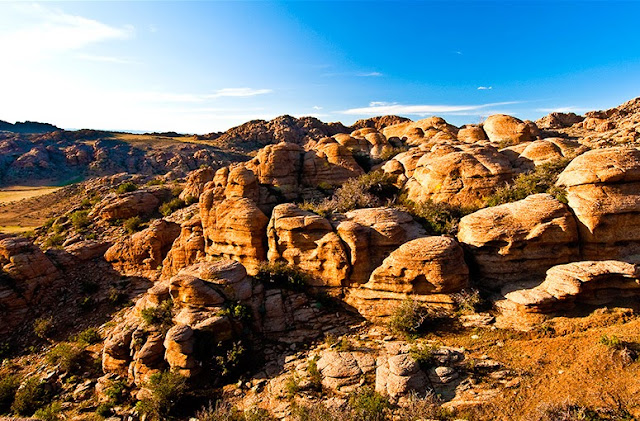 Those who read my blog often will know that this image is a favourite of mine! It’s common for most companies to fly their clients directly down to the southern Gobi but the granite rock formations of Baga Gazriin Chuluu remain one of my favourite locations in Mongolia. Although it has become more popular with the budget guesthouses take a picnic and the day will offer up hidden landscapes with immense views where eagles make their home. Image by our guest Egon Filter 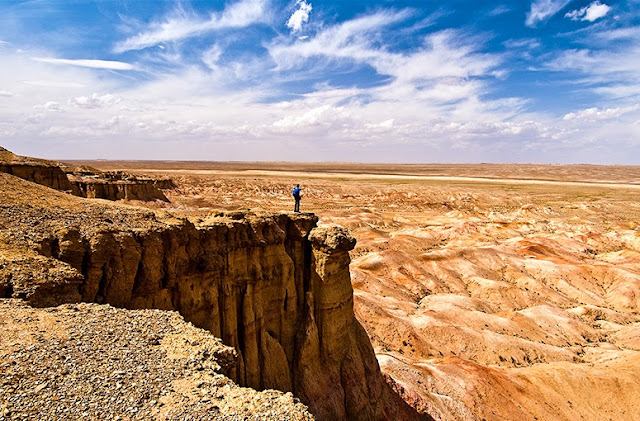 Its name in English is White Stupa which has Buddhist connections. This is an open expanse consisting of sun-scorched rock, scrub, 30m high limestone formations and emptiness. It is an eroded landscape rich in marine fossils as well. Groups come here but pass through quickly so let them take their selfies and shout out at the space and then once they’ve gone listen to the Kestrels and Martins circling on the currents and be at one with the immensity of this incredible landscape. Image by our guest Egon Filter 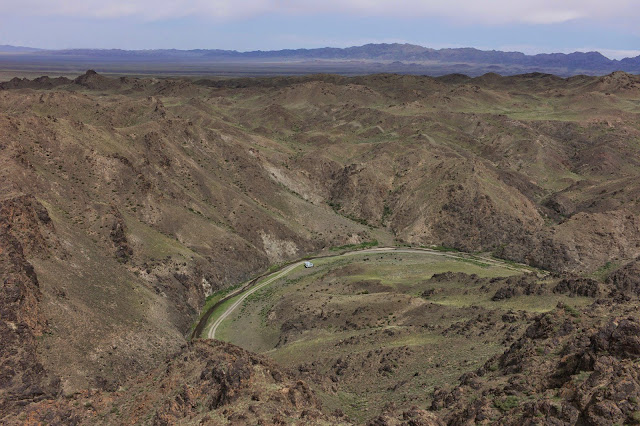 Gobi Gurvan Saikhan is Mongolia’s largest national park – a mountainous terrain rising out of the extensive desert plains and a region of incredible biological diversity. This mountainous region was formed by the same tectonic activity that created the Himalayas and is part of the Gobi Altai Range – the outer crumple zone of the Himalayan geological activity. Yolyn Am is popular. Quite right as well as it is beautiful. However, heading for the hills provides an entirely different experience of the landscapes of this national park. That normal grey dot in the middle of the photo – that’s our Furgon! Some of the mountains in this image top 2500m. Image by our guest Violaine Coard 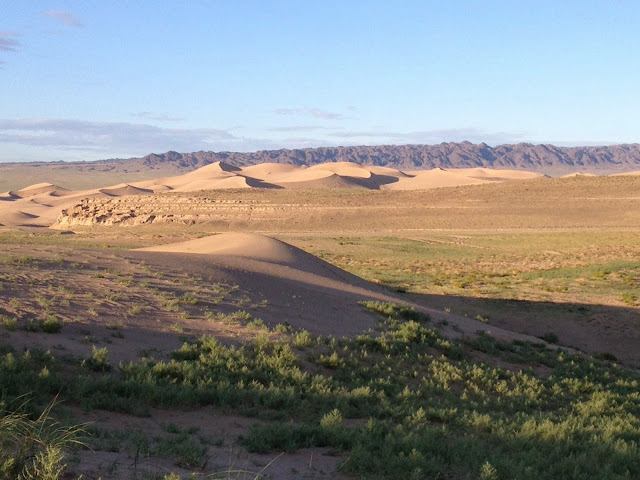 Known locally as Duut Mankhan or the Singing Sands, these are Mongolia’s largest sand dunes.  The reason I chose this photo was because it shows the southern side of the dunes which is a view not that many visitors get to see. Climb on your camel, remove your watch, and spend five days or so circling this incredible area for views that really do take your breath away and for a 21st century digital detox. 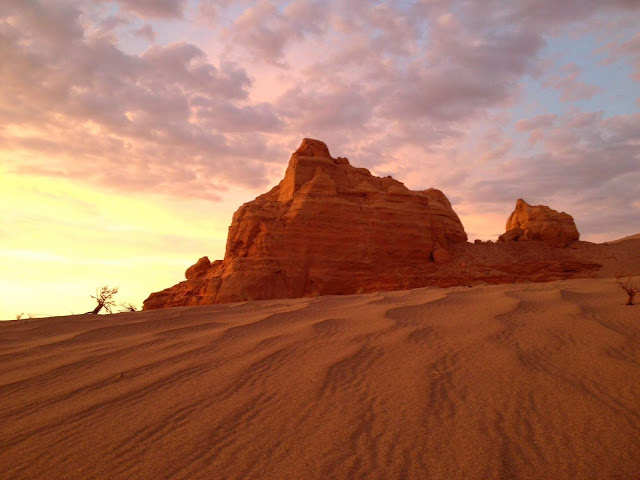 This is Khermen Tsav in the southern Gobi. Visiting here has been one of the highlights of my entire 10 years in Mongolia. The journey to get here, the in the vehicle/out the vehicle to push it through the terrain, the lack of road, the immensity of the space, the silence apart from the wind and then a magnificent sunset in an incredible location that gives you a sense of perspective that is so hard to find in our modern fast paced lives. 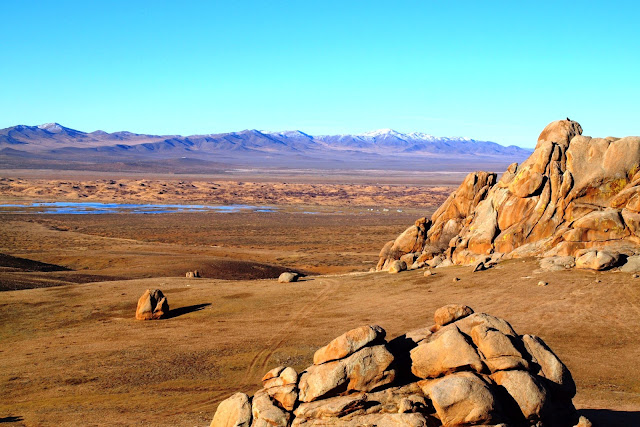 Put on your walking books and head to the immense granite massif of Khogno Khan which extends north to south for some 12 miles and east to west for around 6 miles. It also rises to 2000 feet over the surrounding steppe and sand dunes. It may only be 285km from UB but the views here provide the perfect antidote to the rush and crowds of everyday life elsewhere. Image by our guest John Holman 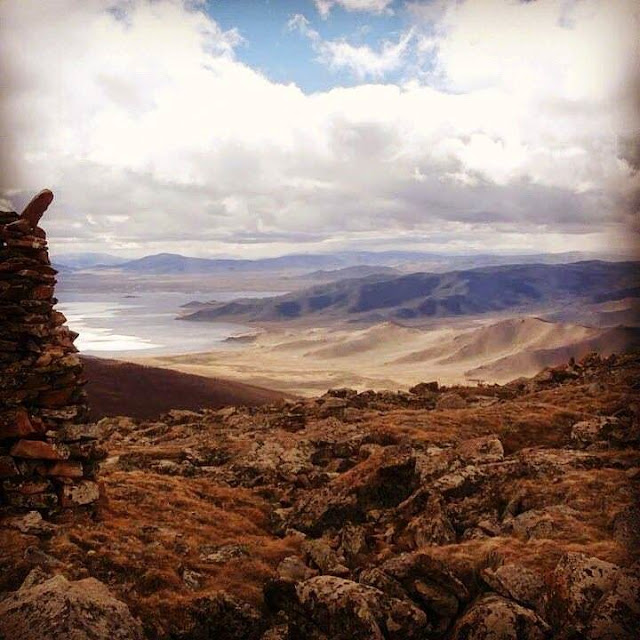 This is Terkhiin Tsagaan Nuur in Arkhangai Aimag. The Altai is an ever increasing popular trekking area – as is Naiman Nuur in Ovorkhangai Aimag but for me Terkhiin Tsagaan Nuur presents a very exciting region to explore and discover on a trek. A national park in its own right it is also bordered by the Tarvagtai National Park. Both are in the central Khangai Mountains and as you can see from the image (taken by Helen Long on her private Untamed Mongolia trip) it is an incredible region. We do day and extended treks here and our extended treks are arranged through Monkhoo – a local herder who works together with his younger brother Boldor. Frequently, marmot is on the menu – cooked by Monkhoo and Boldor for our guests, out on the Mongolian steppe, cooked the the traditional way, over an open fire with hot rocks.  Known as ‘boordog’ in Mongolian, most guests (not vegetarians!) agree it is delicious! 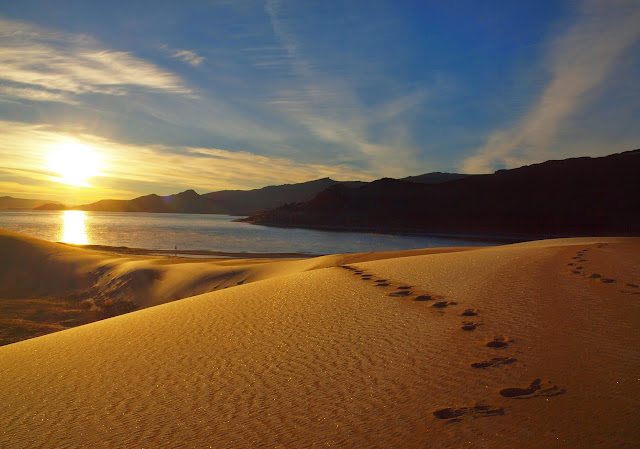 You may not have heard of it but companies head here with camels and kayaks and horses providing multi activity trips. However, we do it the old fashioned way – just placing our tents and taking a few days to explore and discover on foot. In the words (and image) of our  guest John Holman on our arrival at Khar Nuur – ‘As we traverse the southern shoreline the colour of the lake changes constantly with the light – amethyst, jade, emerald, silver and turquoise, while from our campsite nestled between the lake and the dunes the soft pastel pinks, blues and mauves of opal in the eastern sky at sunset are reflected in the mirror-like surface of the lake. The name of this gem is Khar, a very simple name for a simply beautiful place. We are lulled to sleep by the gentle lapping of small waves idling across the lake ahead of a gentle breeze.’ 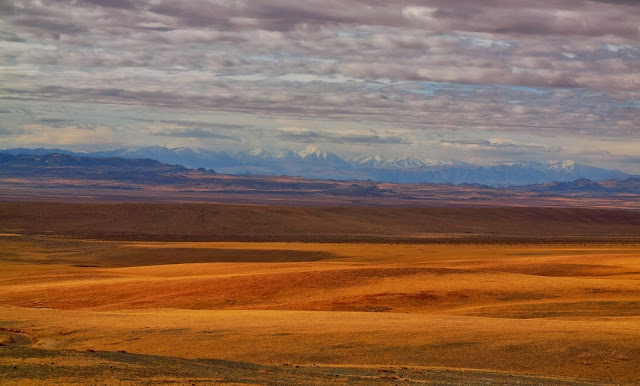 Where?! North western Mongolia. The trekking routes of Altai Tavan Bogd,  Kharkhiraa and Tsambagarav may now be quite a well beaten path but it’s the landscapes in-between that I love. The inbetween places may not be mentioned in any guidebook as they are not considered a highlight but the landscapes are stark, weathered and forbidding and for me, that’s what makes these areas an absolute joy to explore. Image by our guest John Holman 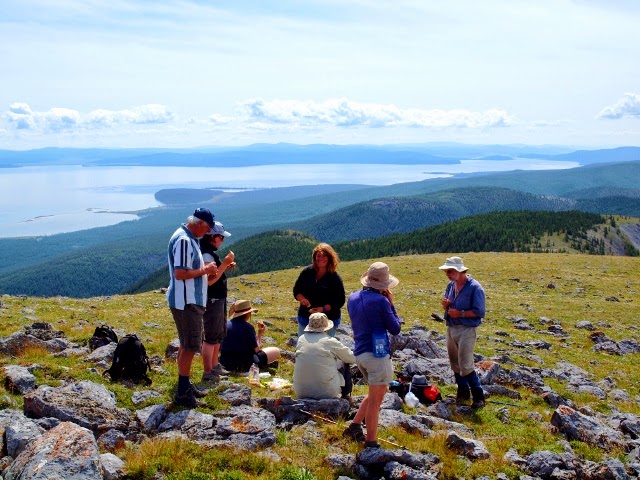 I love this photo taken on one of our day hikes. Although it requires two hours of steep uphill climbing I feel the effort was worth it?! Behind us you can see Khovsgol Nuur but what you can’t see over to the right of the photo is the magnificent Khoridol Saridag providing an immense limestone backdrop. No vehicle was required – we walked from our campsite along the lakeshore, through the forest and up into the land of the gods. These boots were made for walking. Image by our guest John Holman 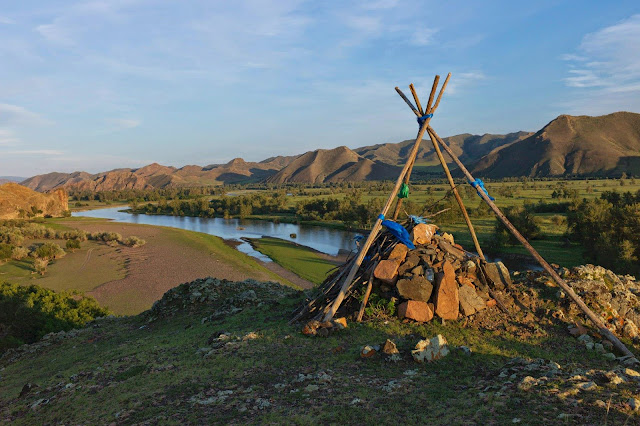 Most companies fly back from Khovsgol to UB. However, jump in the Furgon and look at what you can find. This is one of my favourite sunset viewing platforms in Mongolia. That’s the Selenge River you can see stretched out in front of you – the same one that flows into Lake Baikal. Image by our guest Violaine Coard 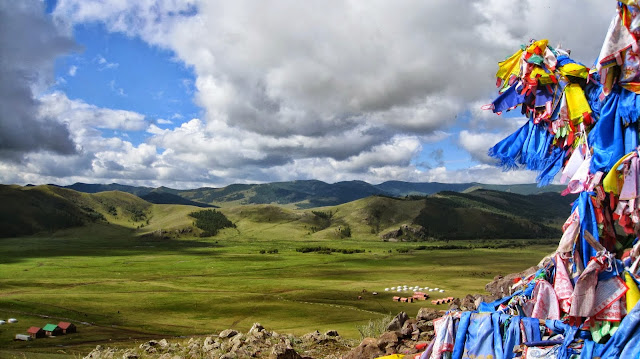 The complex of Amarbayasgalant Khiid is situated in a haven of rugged beauty in the cul-de-sac of a long, deep valley backed by Mount Buren-Khaan against which the monastery is built. The valley is well-watered by the Iver River and has long provided an essential water source for nomadic herders and their livestock. No real maps of the area exist but that’s OK – once again, just put your walking boots on and head up for immense views like this one. By some companies, Amarbayasgalant would be considered very much beaten track. Really? Where is everyone?!

So. That was 15 of our favourites. There could be another 15. Another 30 in fact. For now though, if you want to see more images from Mongolia, why not have a quick look at our Eternal Landscapes website?! 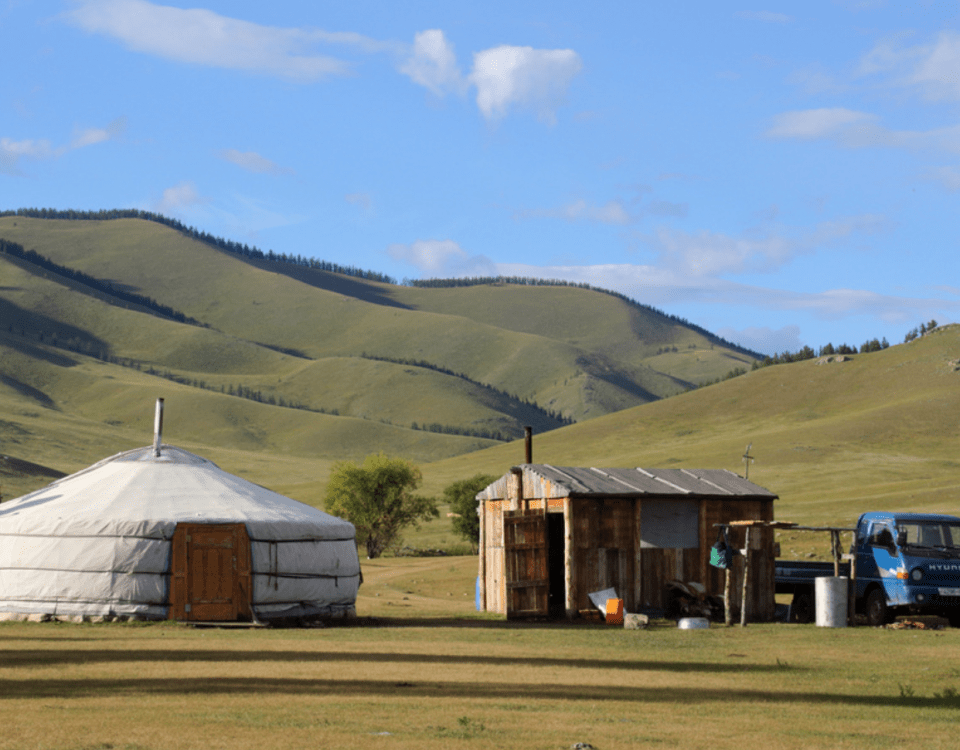